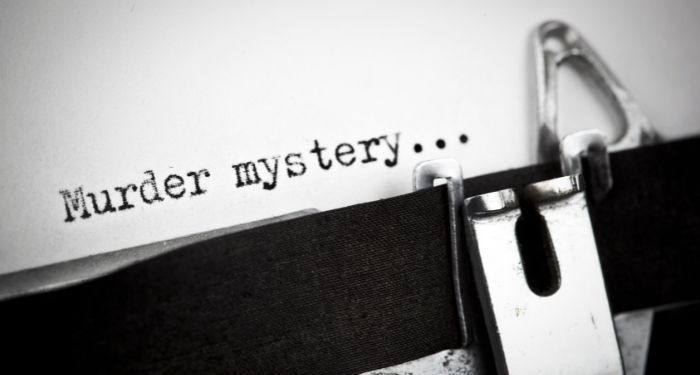 Who robbed the bank? Who murdered the pastry chef? Who stole the car? Where did the lady in apartment B go and why can’t anyone find her? These are just some examples of what a mystery is in the crime genre: there is a crime and someone(s) are trying to solve at least a component(s) of that crime. The key is the book needs to focus on the mystery, whether it’s character focused or plot driven, cozy or bloodbath violent. There are way too many types of mystery plots in general, so I’ve focused on the murder mystery where, as you’ve correctly assumed, the crime is a murder. I’d say it’s probably the most popular kind of mystery. And beneath the murder mystery umbrella are various types of murder mystery plots which we’ll be taking a look at — sans spoilers, of course, I’m not a monster!

In a whodunit murder mystery the focus on the murder is on solving who did it. Sometimes the investigator(s) — amateur or professional and including, but not limited to: PIs, lawyers, detectives, a person tied to the suspect that they are determined to prove innocent — will try to figure out why the murder took place to find a suspect, or they use forensic science to get at least one suspect. Other times they start by interviewing anyone connected to the victim in some way. Sometimes there is already a small suspect pool that they focus on, eliminating people until they’re left with the murderer(s). Being that the story has to fill at least 350 pages worth of a book for a novel, these things don’t go smoothly, ranging from the investigator(s) ending up in danger to red herrings where they were (or the audience was) totally focusing on the wrong person. The key to all murder mysteries, though, is that there needs to be a dead person, at the beginning of the book or even before the book has started, and it needs to be focused on. We of course can see various details of the characters lives related to family, friends, dating, and work, but the bulk of the book needs to always bring the focus back to the murder. In this case, so we can figure out who did it.

A recent example of how a whodunit murder mystery may unfold is Shari Lapena’s Not a Happy Family. Early on we learn that Fred and Sheila Merton have been murdered in their home, right after having an Easter dinner with family, including their three adult children. We don’t know who did it, but plenty of people have motive including their children. As the detectives look into solving the case, the family members all start suspecting each other…

We were just focused on the “who” but now we are going to change our focus to the “why.” A whydunit murder mystery focuses on why the murderer(s) committed the crime, generally giving the reader the suspect from the start or early on in the book. If they’ve already arrested the suspect the focus of the investigation is to give a compelling reason as to why. If someone murdered their brother most people may react with “That makes no sense, it’s their brother.” But tell them they murdered their brother in order to be the sole inheritor of 20 million dollars, the exact amount of money they are in debt for, and people will no longer think it’s impossible that the brother is the murderer. Sometimes it isn’t to prove the suspect is in fact guilty, they possibly already confessed, but rather we are looking to understand why they did it when they won’t tell us the reasoning — the whole trying-to-understand-human-behavior thing. And then there is always the plot of someone confessing, but do we believe their confession? If there is doubt, the “why” can lead to the real “who.”

An example of a whydunit is Deacon King Kong by James McBride. We know that Sportcoat, a church deacon who’d taught a youth baseball team, shot Deems Clemens, because he did it in front of a lot of people at Brooklyn Cause Houses housing project. But why? This is a character-driven whydunit that shows the sheer scope of the genre because in this case we don’t so much as follow an investigator, but the residents of a neighborhood (including Colombian ants — yes, the actual insects) to watch all the components of the “why” come together.

These two kinds of murder mysteries are slightly different but close enough that most readers of one also love the other — and they will overlap with the whodunit and/or whydunit, while adding a new layer.

In locked-room murder mystery plots the murder has occurred in a locked room, so not only are we trying to figure out who did it but also how. It appears to be an impossible crime, elevating the stakes of solving it. In A Gentleman’s Murder by Christopher Huang the locked room is a vault in an exclusive London club in 1924, where a man is found murdered after a “friendly” bet.

Most readers know of the remote murder mystery plot because of Agatha Christie’s And Then There Were None and the film Clue. In a remote murder mystery, we expand the size of the locked room to a remote area, placing a clear and present danger on those in the area because they are stuck there and help is usually at least delayed. This means that the murderer has to be someone amongst them, and if they just killed what will stop them from killing again? Usually the characters must band together or break off into groups to solve the murder. And many times, people will continue to die until the “who” is solved. If you’re a fan of remote mysteries and Agatha Christie, The Decagon House Murders by Yukito Ayatsuji, translated by Ho-Ling Wong, is a Japanese ode to the everyone-is-trapped-on-an-island-and-are-being-picked-off-one-by-one plot.

In past and present murder mysteries there is either a past murder that is unsolved, a present unsolved murder, or a present unsolved murder that opens the door to connecting it to a past murder mystery. In all cases, the story is told in alternating chapters that place the reader in the past and the present. There will be an overlap of either related characters, an investigator, or a connection in the crimes and both time periods are needed to fully solve or understand the crime. My Sweet Girl by Amanda Jayatissa mixes a psychological thriller with a present murder mystery told in then and now chapters. Paloma found her roommate dead, but when the police arrive his body has disappeared. We get alternating chapters of her present life (cut off from her wealthy adopted parents as she tries to figure out what happened to her roommate, who just happened to have blackmailed her over a secret) and her childhood (growing up in a Sri Lankan orphanage up until she was adopted). Both past and present are tied, but one of the questions is how? And more importantly: who murdered her roommate and where is his body?

Serial killer murder mysteries are usually ones with active murders occurring where a professional investigator (sometimes aided by an amateur) needs to first figure out who the murderer is and/or catch them before they can kill again. This opens up a lot of paths for getting to know the investigator(s) and the killer, and why the murderer is killing so many people, but it also allows there to be various setups. If this is a new serial killer, first the investigators have to prove the murders are related. Is this a serial killer that was silent for years and only just started killing again, creating the question why and where were they all this time? Or like in The Jigsaw Man by Nadine Matheson if the serial killer is already in prison, are the new murders a copycat or has the incarcerated serial killer partnered with someone outside of prison? Or did they always have a partner who has started to kill again? Because of the ticking time between murders, these also fall into the thriller genre because of the intensity.

Is It A Murder Or Not?

This kind of murder mystery hinges on presenting a death at the beginning where it isn’t clear — or there is at least one person who doubts — whether said death is in fact (you guessed it) a murder. Usually the death is initially ruled a suicide or a death by natural causes. In Wanda M. Morris’s All Her Little Secrets we start with lawyer Ellice Littlejohn finding one of the firm’s partners dead at his desk with a gunshot in his head in what could be a suicide or might be a murder. In Elly Griffiths’s The Postscript Murders, the death of Peggy, a woman in her 90s with a heart condition, doesn’t exactly scream murder at all. But Peggy’s home health caretaker has some concerns about her death when she finds out the old lady was basically a murder consultant…so, murder? Maybe. Or maybe not.

Did They Or Didn’t They?

A murder has been committed, and a suspect has either been arrested or is believed to be guilty by many people. But the entire book reveals information that flips back and forth from making them look incredibly guilty or not guilty at all. Which will it be? In A Good Marriage by Kimberly McCreight we get a did-he-or-didn’t-he murder mystery and a legal thriller in one. Lizzie Kitsakis goes from being a happily underpaid federal prosecutor to a not-so-happy defense lawyer at an elite law firm when a past friend from law school calls her from prison, asking for her to take his case; he’s accused of murdering his wife but swears he didn’t do it…

While not exhaustive, there you have eight types of murder mystery plots, and as you’ve probably noticed the plots can mix and mingle for extra fun. I just finished reading Silent Parade by Keigo Higashino, translated by Giles Murray, which manages to blend a murder mystery whodunit, whydunit, and a howdunit, with a past and present. You’re welcome.