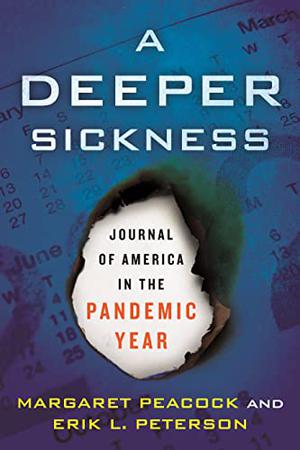 
A real-time document of a year of calamity.

University of Alabama professors Peacock, a historian of propaganda and the media, and Peterson, a historian of medicine and science, each kept copious notes during the daily chaos of 2020, tracking “hundreds of news stories, reports, tweets, posts, blogs, speeches, and videos from across the political spectrum.” Presenting those notes as a day-by-day journal, they have captured vividly “how people encountered these moments and what historical factors informed their understandings of the events unfolding around them.” Beginning on Jan. 1, when they report the alarmed findings of a global disease tracker about a viral outbreak in Wuhan, the authors convey the “messy immediacy” of a year marked by disease, disinformation, and violence. Central to their observations was the increasing threat of Covid-19, complicated by Trump administration policies, dysfunctional government, and “stark, intractable” political partisanship. “It’s a hoax, the Democrats have politicized it, Bill Gates is profiting from it, it’s a Chinese weapon,” social media posts proclaimed on Feb. 29, after the first American died. By March 26, the U.S had become the center of the pandemic even as a debate pitching public health measures against individual freedoms intensified. The pandemic was only one among many other traumas, including the opioid epidemic, lack of affordable housing, the ravages of climate change, and systemic racism. The killing of George Floyd in May and the protests that followed underscored the racial and economic inequality roiling the nation. Summing up their chronicle of chaos, the authors point to three factors that “made America sicker than we should have been in 2020: (a) entrenched racial hierarchies; (b) an economic structure dependent on individual accumulation of wealth and widespread consumption of ephemeral goods and entertainment; (c) distraction, cognitive dissonance, and an intentional historical amnesia that prevented the majority of comfortable, well-intentioned, middle-class, white Americans like ourselves from doing anything about the first two issues.”