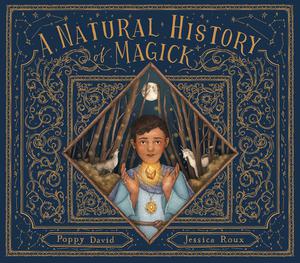 Introduced as a mysteriously found “scrapbook,” dated 1925, of one Conrad Gessner, the book maintains its sense of authenticity with bland Eurocentrism. Beginning with “A Brief History of Magick,” David (as Gessner) provides a first-person narration of magick practices through a typical Western timeline: ancient Egypt, classical-era Greece and Rome, and “Modern,” with a single spread dedicated to both the entire African continent (exclusive of Egypt) and the Middle East. Following this (brief indeed!) history, each spread provides an overview into a single form of magick, including divination, alchemy, potion-making, and more. Notably absent is any explicit mention of Christianity (a fairly major contemporaneous counterpoint), any explanation of the relationship between star signs and the stars, and the entire continents of North and South America, bar a single sentence mentioning Machu Picchu and one throwaway mention of vague “First Nations peoples’ ” associations with the moon. Also, nowhere in the text is an explanation of the difference between occult “magick”—with a K—and stage “magic”—without. It’s pleasantly and thoroughly illustrated in pencil and watercolor, with diverse humans and nods to the Rider-Waite-Smith tarot deck. Still, despite the cloth binding and ribbon marker, readers will find more amusement in Candlewick’s venerable ’Ology series.

An apparent tribute to Victorian-era antiquarianism and all the gaping research holes therein.