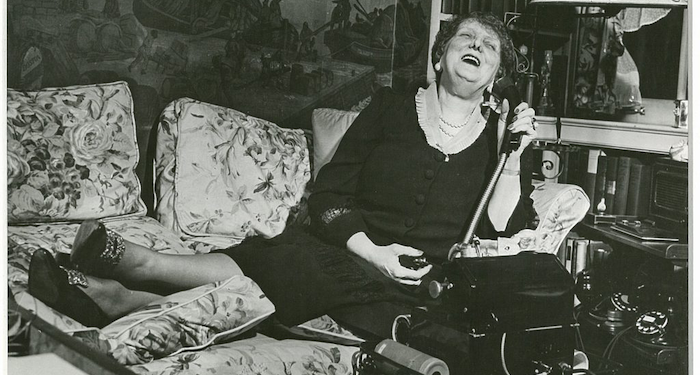 A Polite Plea for a Biopic of Emily Post

What comes to your mind when you hear the word “etiquette”? Perhaps a fancy dinner party with an array of sparkling silverware, none of which you know how to use. Perhaps you make a quick lowercase “b” and “d” with your fingers to remind you which side of the main plate the bread and the drink go on. It’s entirely possible you picture of people in old fashioned clothes with stuffy manners, with the older generation bemoaning how “young people these days” don’t know how to behave, as the older generation has been doing since time immemorial. If you’re an etymology nerd or a speaker of Old French (or both), you might notice that the English word “etiquette” is only one letter off of “estiquette,” which means “ticket.” And as such, “etiquette” is essentially a way to gain entry or acceptance through one’s proper behavior.

And if you’re me, you think of the several guides to etiquette on your shelf, stretching back decades and used for several friends’ reference when they got married. I think of the crowning jewel of American etiquette, Emily Post, and would dearly like to know why we have not yet had a biopic about her life.

Because you are not me, at this point you may be wondering why on earth a person would want a biopic about the woman who had the absolute gall to publish a guide to civil behavior in the 1920s. Welcome, my friends, to today’s sermon on the Astonishing Life of Emily Post.

Emily Price was born in Baltimore, Maryland in 1872. Her father was Bruce Price, a prominent architect; he was the architect of Pierre Lorillard’s Tuxedo Park, whence we get the word “tuxedo.” He also planned George Jay Gould’s Georgian Court estate and a summer palace for the Emperor of Japan. His wife, Josephine Lee Price, ran the family business with her husband. The Price family moved to New York City in 1877.

Emily was educated at home until she was old enough to attend Miss Graham’s Finishing School. Then, in the year of Emily’s debut, she met the very dashing Edwin Post at a ball in a Fifth Avenue mansion. They had a society wedding, followed by a tour of the Continent and the birth of two sons. So far, Emily’s life is a fairly standard Gilded Age story of a wealthy New York businessman’s daughter. This is all about to change.

In 1905, Emily filed for divorce — a move that was virtually unheard of from a woman of her wealth and class. Worse, the stated reason was that Edwin had been dashing about with chorus girls and young actresses and was being blackmailed because of his philandering. The divorce was an utter scandal, splashed all over the society columns of the papers at the time. She procured her divorce at the cost of much of her reputation and place in society, but she was now a free and wealthy woman, and she began to write.

Emily wrote several novels in the early 1910s, none of which remain in print. And then, on a Tuesday morning in 1915, she proposed to her editor that she and her son Edwin drive from New York to San Francisco — a feat that had up until then only been accomplished by a caravan of cars all driving together, including at least one mechanic. At the last moment, a cousin joined them, and by Saturday they were three intrepid travelers setting off across an America that was still almost 40 years away from the beginning of the highway system we know today. In 1916 she published By Motor to the Golden Gate, which reads like a chatty, delightful adventure full of extremely sharp commentary on everyone and everything our Emily encountered.

When Emily’s two sons enlisted to fight for the United States in World War I, she worked tirelessly to support the national war effort. She worked stateside on Edith Wharton’s initiatives to help Belgian children displaced by the war. There is a photograph in The New York Times from May 9, 1917, of J.P. Morgan Jr. buying a $10,000 war bond from his childhood friend, Emily Post.

It was only after the war was over, when Emily found herself back at dinner parties instead of volunteer efforts, that Etiquette came to the forefront of her imagination. Post-war America was full of new brides wondering what went into a thank-you note, newly-monied people with no generational knowledge of the expectations of their class, and new immigrants.

As Laura Claridge says in her fascinating biography, Emily Post: Daughter of the Gilded Age, Mistress of American Manners, Americans have been obsessed with defining the etiquette of our nation since before its inception. Etiquette books were published at a rate of five or six per year from the 1870s to 1900. A nation of immigration and a mishmash of both cultures and classes, Americans are always concerned with how to behave. And in 1922, Etiquette was published, immediately surging to the forefront of the “civil behavior” genre and remaining there up until the present day. Emily Post’s great-great-grandchildren run the Emily Post Institute and publish suggestions for appropriate manners in everything from online interactions to marijuana use.

At the core of Etiquette — and of its success — is a belief that no one should have to be shamed by their behavior, either in private or in public. It is suffused with Emily’s concern for people who are trying to do the polite thing, but never at the expense of doing the right thing. For anyone who has never read Etiquette, it may also surprise you to know that it’s good for several chuckles and even the occasional “HAH!!”, such as when the author informs us that while one should probably not rest one’s elbows on the table at a formal dinner party, it’s probably fine anywhere else.

I realize that I have waxed poetic about my favorite etiquette maven for 900+ words, which she would probably love considering that she was, by all accounts, honest and forthright about her abilities and accomplishments. I will leave you with one of my favorite anecdotes:

My own grandmother and I clashed often, as family members sometimes do. She once famously told me that I shouldn’t wear red shoes, especially with spaghetti straps, because only whores wear “things like that.” She couldn’t even say the word “whores” out loud; she just mouthed it with exaggerated breathiness. Bless her, my grandmother was a kind woman, but occasionally her advice was somewhat misplaced. (N.B. The shoes in question were sandals, the spaghetti straps were a tank top, and it was 102 degrees that day.) Upon reading Emily’s biography by Laura Claridge, I discovered that Emily herself particularly loved red shoes, so much that when she died, she owned a closet dedicated to them. I have rarely felt so vindicated in my life, although I never told my grandmother, who has since passed. Emily Post would never have condoned throwing such a fact in an elder’s face.