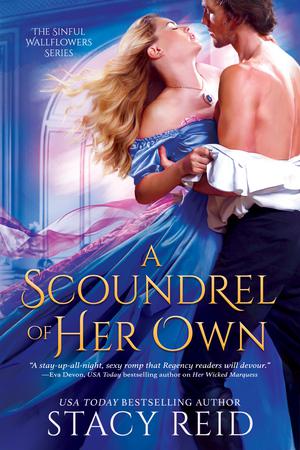 A SCOUNDREL OF HER OWN | Kirkus Reviews


In 1807, 8-year-old Ophelia Darby falls into a river and is washed downstream. She’s saved by Niall, a young boy who jumps in after her and carries her to shore. Unsure of where they are, the children hide out in a small hunting cottage and become best friends before being rescued days later. Ophelia’s the daughter of an earl, and Niall’s a commoner, so they’re quickly separated, but they promise to always remember each other. Fifteen years later, Ophelia finds out that the woman who raised her isn’t her birth mother, and her family is in massive debt. She travels to a dangerous part of London on a search for her biological mother, where a mysterious man named Devlin Byrne offers his protection; the self-made, wealthy gentleman, whose middle name is Niall, recognizes his childhood friend immediately but is hesitant to reveal the truth. He asks friends to accompany her on her quest and even sends her some bank notes to cover her debts. Devlin longs for her to sing to him again, dance with him, and maybe even love him, but society would never allow a noblewoman to marry him. Then again, Ophelia never did do as she was told. In this third book in a series, Reid offers a fast-paced historical romance in which the characters are clearly passionate about not only each other, but also about their own life goals. The initial time skip—from when Devlin first sees Ophelia to months after he meets her again as an adult—gets the romance plotline off to an awkward start, and readers who are unfamiliar with the previous books in the series may find it frustrating that past events, such as a scandal involving Ophelia’s friend Maryann, are merely glossed over. However, newcomers who are willing to stick with the novel will find a fine romance that makes it easy to overlook any shortcomings.