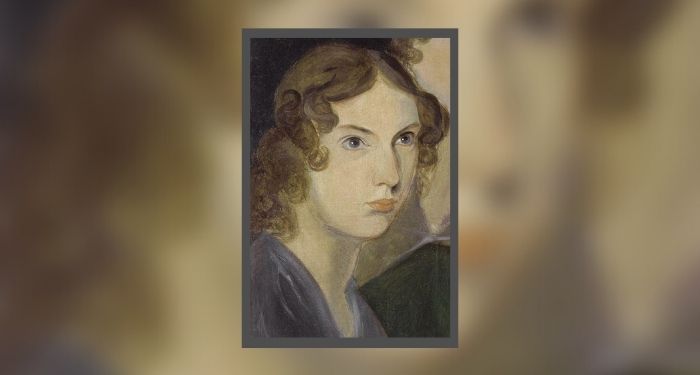 Anne Brontë is best known as the third sister of Charlotte Brontë, who wrote Jane Eyre, and Emily Brontë, who wrote Wuthering Heights. The way history remembers her, Anne is basically Peggy from the musical Hamilton. But Anne published novels alongside her sisters. In fact, she is likely the sister who began writing novels first. Many consider her novel Agnes Grey to have been an inspiration for her sister’s novel Jane Eyre. And despite a lack of recognition, many consider Anne’s second novel The Tenant of Wildfell Hall to be the first feminist novel.

Her novels were well-reviewed by critics and popular with readers during her time. But soon after her death she became dismissed as the least talented of the three sisters and forgotten by history. Who was Anne Brontë? And how did she become the forgotten Brontë sister?

Brontë family tragedies consumed Anne’s early childhood. (Brontë family tragedies consumed her later life, too…but we’ll get to that in a few minutes.) She was born January 17, 1820, in Bradford, England. Her father Patrick, a poor Irish clergyman, was a curate there. Her mother, Maria, came from a wealthy family, but married Patrick because of their similar religious convictions. Anne was the youngest of their six children. They moved to the small Yorkshire town of Haworth when Anne was just a few months old. And when she was barely a year old, Anne’s mother died. Anne was primarily raised by her mother’s sister, Elizabeth Branwell. Her aunt was a stern, severe woman who cared more about children’s obedience than love and affection. However, Anne was supposedly her aunt’s favorite of all the Brontë children.

When Anne was four years old, her father sent her four older sisters away to school. Just one year later, tragedy would strike their family again when her oldest sisters Maria and Elizabeth died of consumption while at school. Charlotte and Emily were brought home, and for the next five years Patrick refused to send any of the children away again. Instead, the remaining Brontë children were mostly educated at home by their aunt and father.

Anne spent most of her time with her siblings instead of making friends outside of the home. Anne and her siblings invented fantasy worlds and kingdoms for their imaginative play. These worlds however extended well beyond ordinary childhood games. They became all-consuming and involved writing newspaper articles and poetry based in the fictional kingdoms.

Anne’s Time as a Governess

When Anne’s older sister Charlotte became a teacher at the Roe Head School, Anne attended as a pupil after Emily was deemed too delicate to be away from home. After two years of school, Anne had a health crisis of her own and was sent home. At the age of 19, Anne needed to find a job. Her father didn’t make enough money to support his adult children, so they all needed to find jobs. Anne’s first position was as a governess for the the Ingham family at Blake Hall. Anne hated this job and found the children spoiled and impossible to teach. After less than a year she was dismissed from the position.

Her next position as a governess at Thorp Green Hall was more successful. She didn’t enjoy the work or being away from home, but she was determined to stay in the job for almost five years. She became well liked by her employers. And even after leaving the home, the Robinson girls who she taught became life long friends. One dark point in her time at Thorp Green Hall was when she helped get her brother a position as a tutor for the family’s oldest son. Scholars assume from his letters that during this time he entered into a secret affair with the wife of his employer. He was eventually fired and Anne resigned around the same time. Both of these jobs served as important inspiration for Brontë’s future novels, especially Agnes Grey.

Anne returned home after resigning from her governess job at Thorp Green Hall. And in the summer of 1845, all of the Brontë women were home without any firm plans to find future employment. In 1846, the sisters used some of their inheritance from their aunt’s death to publish a joint book of poetry published under their pen names: Currer, Ellis, and Acton Bell. The collection was a financial flop, though Anne would go on to publish her poetry in other journals.

This beginning of their writing career gave them the push to send a collection of their novels to publishers. Together they sent out Agnes Grey by Anne, Wuthering Heights by Emily, and The Professor by Charlotte. A publisher accepted Agnes Grey and Wuthering Heights, deciding to publish them together in one manuscript. Publishers declined The Professor, but soon after Charlotte completed Jane Eyre, which actually published first out of the trio. The sisters kept their pen names, although there was intense speculation that one writer actually wrote all three works.

Agnes Grey and The Tenant of Wildfell Hall

Even though Anne’s books have been overshadowed by Wuthering Heights and Jane Eyre, they were well-reviewed and quite popular during her lifetime. They also were important and radical in their own right. In 1847’s Agnes Grey, Anne brought to light the difficulties and dangers governesses faced within their position. The story exposes the cruelty of wealth inequality between the title character and the families she worked for. Unlike in her sister’s novel, there is no romantic employer to fall in love with or savior within the system. Instead the romantic lead is a nearby country parson, who may have been based on Anne’s own relationship with William Weightman, a curate in her father’s parish. But romance isn’t the main focus of Agnes Grey. Instead, there’s a clear critique of the financial system which places young women completely at the mercy of their employers and a link between wealth and immorality.

Just one year after the publication of her first novel, her second book The Tenant of Wildfell Hall came out in 1848. While the book feels old fashioned in certain ways now, it was very radical for its time. In the epistolary novel, the heroine Helen leaves her abusive, alcoholic husband and enters a new neighborhood, pretending to be a widow. She supports herself and her young son through her painting. In Victorian England, there was no legal or moral precedent for a woman claiming this power, in real life or in fiction. While the book sold was an instant success, critiques found the book disturbing and inappropriate, especially for female readers.

How Anne Became the Forgotten Brontë

Soon after the Brontë sisters began publishing, a string of family tragedies began again. In September 1848, Branwell suddenly died of a bad cough that was probably tuberculosis. Emily became sick as well and passed away in December 1848. Anne’s grief for both her siblings, but especially her older sister, was intense and began negatively affecting her health. She had a severe influenza over the Christmas holiday, and while she appeared to recover, the sickness and her grief weakened her significantly. She died half a year later in the summer of 1849. It’s impossible to know what kind of books the world missed out on from Anne Brontë because of her early demise at the age of 29.

While Anne’s novels were popular and well regarded during her lifetime, history hasn’t remembered her well. One reason for this may have been that her sister Charlotte refused to allow the republication of The Tenant of Wildfell Hall during her lifetime. People disagree as to whether Charlotte’s decision came from jealousy of her youngest sister or her own dislike of the book. She wrote that she thought the subject of the book was a mistake. And she didn’t want the novel preserved.

Even though Anne wrote Agnes Grey first, I believe it being published after her sister’s Jane Eyre also helped historians and scholars dismiss it as simply an imitation. Eventually, Charlotte and Emily Brontë became celebrated as literary geniuses. Literary scholars paid more attention to Anne Brontë in the 20th and 21st centuries. However, she’s still not nearly as widely read or well remembered as her sisters.

To learn more about Anne Brontë you can read The Life of Anne Brontë by Edward Chitham, Anne Brontë: Her Life and Work by Ada Harrison and Derek Stanford, or In Search of Anne Brontë by Nick Holland. You can also take this Brontë Sister Quiz to find out which sister you are most like or brush up on your Brontë sister facts. And I definitely recommend reading one of her books if you haven’t before!