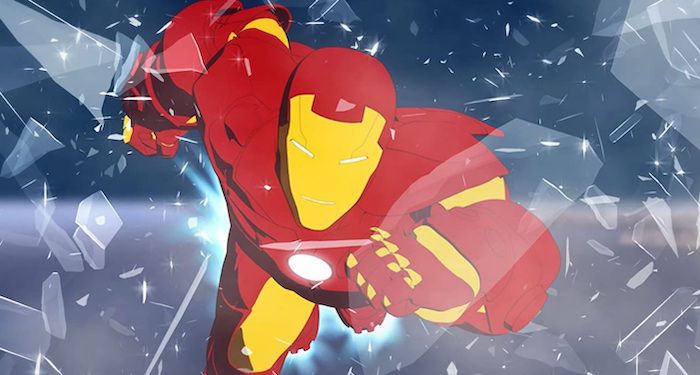 
The success of 2008’s Iron Man launched the Marvel Cinematic Universe (whether that’s a good thing or not is up to you). But our friendly neighborhood Shellhead had a screen presence even before that. In the 1960s, he featured on a cartoon with the clunky name The Marvel Super Heroes. The 1990s gave us another cartoon, Iron Man. And in 2008, there was Iron Man: Armored Adventures, a CG-animated series that ran for two seasons.

It’s easy to see why it was so short-lived: it did not gel at all with Robert Downey Jr.’s interpretation of the character, and the animation was, well, not up to What If…? standards. (It barely meets original Toy Story standards, if I’m honest.) But I find it rather charming. Part of that may be nostalgic gratitude, since this was my first real introduction to Iron Man.

But the most noticeable aspect of the show is the fact that Iron Man was really more like Iron Boy: he and his friends were just 16 at the start of the show and 18 at the end.

De-aging characters to appeal to younger audiences isn’t unusual. DC Super Hero Girls put some of our favorite heroes in a school setting, as did the now-defunct mobile game Avengers Academy. And while this could have been the prime motivator for the folks behind Armored Adventures, there is a much longer, more sordid history behind the idea of a teenage Iron Man than most viewers probably suspected.

The ’90s were very, very bad for comics. Aside from the ugly fashion choices, uglier art styles, and the fact that Marvel went bankrupt, there were some deeply questionable storylines. “The Crossing” was among the most questionable of all.

I’m not going to try to summarize “The Crossing” in its entirety, because that would take too long, it’s not relevant, and I’m not sure I understand it myself. (No one does. It’s inexplicable.) The point is this: Iron Man was revealed to have been a pawn of Kang the Conqueror for years, and Kang is now using him to try to remove Earth from the timestream. The Avengers want to stop this, but Tony is such a goshdarn smartypants that no one can undo the damage he has done, not even the combined intellectual abilities of every scientist in Wakanda, including Black Panther. As far as plot points go, that’s up there with One More Day‘s “we all forgot how to treat bullet wounds” as one of the biggest loads of garbage Marvel has ever tried to sell.

Eventually, our heroes decide that the only person who can stop Tony Stark is Tony Stark. So they go tiptoeing through the timestream/multiverse and pluck an untainted, 19-year-old Starkling out of the past to help them out.

OG Tony attacks Teen Tony, giving him a heart condition that can only be ameliorated with an armored chestplate, conveniently establishing a sense of continuity. Then OG Tony sacrifices himself to stop Kang’s plans, leaving Teen Tony as our universe’s sole Iron Man.

Teen Tony settled in quick enough, enrolling at Columbia University and even working with the Avengers…and that was all he got to do. “The Crossing” occurred in 1995. The very next year, “Onslaught” happened, seemingly killing most of the Avengers and the Fantastic Four. By the time they returned, Iron Man was back to his non-evil adult self. Teen Tony — that poor, ill-conceived plot point — was swept under the carpet.

On With the Show

Iron Man: Armored Adventures mercifully had jack-all to do with “The Crossing.” This Teen Tony was left orphaned after his father was killed in a plane crash. Tony, also on the plane, survived thanks to the armor that he just so happened to have just invented and brought with him. Tony decides to use the armor to prevent bad guys — including Obadiah Stane, who has control of Stark Industries until Tony comes of age — from misusing his father’s inventions.

Most of the other characters — Nick Fury, Hawkeye, Hulk, and various villains — were kept at their regular ages. But some were de-aged along with Tony, most notably his friends Rhodey and Pepper, and his archnemesis, the Mandarin.

I have many feelings about the Mandarin, most of which can be summed up as “put him in the bin,” but at least this series put some effort into making him an interesting character. Gene Khan, convinced that he is destined to use ten power rings to bring about world peace/subjugation, pretends to befriend Tony while exploiting his intelligence to find the missing rings. While he does betray Tony at the end of season 1, he’s mildly conflicted about it. Season 2 even ends with him deciding maybe he should be a hero instead of a conqueror.

The season 1 finale reveals that Tony’s dad Howard survived the plane crash after all, and Mandarin had been making him search for the rings as well. This version of Howard is considerably nicer than others; the series transferred the whole “I must stop making weapons” revelation from Tony to Howard, and as far as we ever see, he’s a perfectly caring, non-alcoholic, non-abusive parent. (This appears to have been a trend. Marvel Adventures: Iron Man, a kid-friendly reboot of the character published in 2007–08, also de-douched and resurrected Howard. Not Tony’s mom, though. She can stay dead for all we care.)

Armored Adventures ended in 2012 — the same year as The Avengers hit theaters — with a team of proto-Avengers fending off an alien invasion and Tony falling out of the sky after seemingly sacrificing himself to save everyone, which is quite the coincidence.

By this point, you might be asking why they bothered to make an Iron Man series at all if they were going to change him so much. Heck, can he really be Iron Man without the alcoholism and the moral ambiguity? Tony does still retain his essential personality traits — being snarky, working too hard, doubting himself constantly, occasionally being tempted to the dark side — but those characteristics describe a lot of heroes. Isn’t “teen science genius superhero” Spider-Man’s department?

One thing to distinguish Teen Tony is Rhodey and Pepper, who smack sense into him as necessary. They eventually join him out in the field, with Rhodey getting his War Machine armor and Pepper — after MUCH nagging on her part — getting to be Rescue for about two episodes.

Even beyond that, there is still plenty here to mark this as a distinctly Iron Man cartoon. One of the show’s main villains is Obadiah Stane, a businessman who tries to take over Stark Industries. A recurring theme in Iron Man comics is that people are constantly trying to get hold of Tony’s business and force him to go back to designing weapons, and that’s a big part of the show, too. There are also a few episodes where Tony brings the legal hammer down on Stane with the help of his guardian, Roberta Rhodes, Rhodey’s mother and a badass lawyer.

(Honestly, Roberta is severely underused. I guess it would have wrecked the “teen hero” vibe, but I for one would have liked to see Tony and Roberta bond some more, grieve together over Howard’s death, and kick some legal butt.)

Other business-related villains include Justin Hammer (here de-aged to a frat boy) and the Ghost, a hacker who discovers Iron Man’s secret identity and threatens to out him on his 18th birthday. This proves irrelevant, as his identity is slowly leaked to everyone and their grandmother throughout season 2, culminating in Tony losing his helmet in the middle of a busy street. Iron Man foe/love interest Madame Masque also appears, though I fear that die-hard fans of the character will be disappointed.

In the end, I’m not sure if this show is better suited for Iron Man fans (even though it changes so much about the character) or for people who don’t like Iron Man all that much (even though it has Iron Man in it). Either way, I wouldn’t call it a must-watch, unless you’re a completist. But it is a fun show, and if you have Disney+, it won’t cost you anything extra to give it a shot. At least check out the bangin’ theme song.