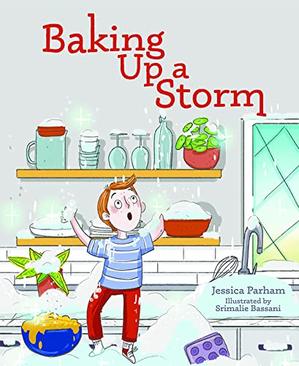 BAKING UP A STORM | Kirkus Reviews


A child and mother follow a grandmother’s famous cupcake recipe, unleashing a magical storm of ingredients in this cleverly inclusive rhyming picture book.

A pale, sports-loving child with orange hair, red pants, and a striped blue and white shirt plans for an average day baking when something magical happens. “Our ingredients were out, all placed in a row, / but then somehow, it started to snow!” the child recounts. It’s not snow pouring from the ceiling but flour, and as soon as the narrator scoops some into the bowl, the flour storm stops. Next, milk pours from the faucet, sugar floods under the doors, eggs drop from the ceiling, and butter flows across the floor. As each ingredient is added, the last storm stops, until salt, vanilla, and baking powder are all added to the mix. After a dash of sprinkles, the cupcakes go in the oven, and the result is delicious. The narrator offers an almost Jack Prelutsky–ian tale of kitchen chaos, never mentioning in the text the limb difference shown in Bassani’s fantastical cartoon illustrations. The child’s shorter arm doesn’t ever hinder adding each ingredient and stirring it into the mixing bowl; instead, this story is about magic, chaos, and baking a family recipe, and it features a hero with a limb difference. Parham’s scansion sometimes adds or drops a beat, but the rhymes are solid, with fun-to-say words (goop, bonkers) sprinkled throughout.

A tale of kitchen whimsy starring an underrepresented hero.