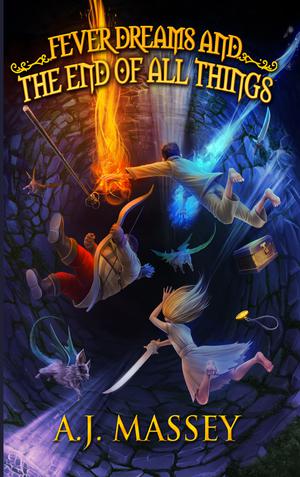 FEVER DREAMS AND THE END OF ALL THINGS | Kirkus Reviews


In two weeks, Ben Young will be graduating from South Point Middle School. He and his best friend, Marcus Cooper, plan to become “cool” over the summer before starting at Trinity High. Ben worries that his girlfriend, Avery Hopewell, can’t possibly like him in the waking world after seeing his bravery in Meridia, the magical realm that the teens visit in their sleep. Later, at the school year’s final dance, Avery and Ben enjoy themselves—until the fire alarm sounds. During the panic, Ben faints. He wakes up in Meridia with Avery and Marcus in a boat rowed by their elf friend, Tamerlane. Also present is Wolf, one of the flying dogs called dragonwoofs native to the realm. The group is soon captured by the Red Army, now commanded by Marissa, who, like Ben and his friends, is a weed—someone transported to Meridia from the waking world. Though Marissa has taken over for the sinister, deceased Sovereign, a worse threat imperils the land. The Ghastly Three, led by the Supreme, want to assemble five artifacts into the World Builder and remake Meridia in their horrid image. For this engaging sequel, Massey once more carefully balances true adolescent drama with high-stakes fantasy. After Marcus succeeds in fending off school bullies—and is accused of being one himself—his parents decide to send him to a “behavioral fitness camp.” Meanwhile, Avery, who lives in a group home, is adopted by a family living in faraway Oregon. Perhaps saddest of all are Marissa’s real-life travails, which involve a home shattered by mental illness. Ben’s potential as a rare mage who can wield opposing elements (like fire and ice) simultaneously carries the gripping narrative into familiar chosen one terrain. Despite beautiful moments, as when “a soft white light seemed to emanate from the base of the glass trees, illuminating the entire forest,” this is a dour series entry. An eerie cliffhanger primes fans for the next volume.