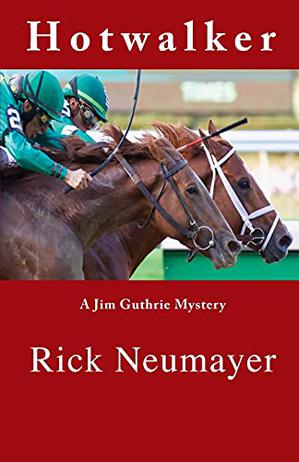 
In this mystery, a private eye braves Kentucky’s hectic Derby week to investigate a murder at Churchill Downs.

Sleuth Jim Guthrie anticipates his business will take a hit with the Derby festivities starting. But he finds a client in Guatemalan immigrant Carlos Rojas, a Churchill Downs “hotwalker” who cools down horses with quiet strolls following a workout or race. At last year’s Derby, someone fatally bludgeoned Carlos’ father, Felipe, who worked as a groom. Since then, the police investigation has turned up nothing, so Jim looks into the homicide on his own. Sadly, he quickly realizes that questioning employees at the Churchill Downs backside is a largely fruitless endeavor. As many are immigrants like Carlos, they stay tight-lipped, understandably wary of recent United States laws. But there is a bevy of suspects that Jim can whittle down. Robbery may have been a motive, as Felipe, who won at poker on the night of his murder, had no money on him. He also got in a fight with a man claiming Felipe cheated at that poker game. In the course of his investigation, Jim forms an unexpected alliance with Wyatt Whitlow, who publishes The Late Mail, a tip newsletter. Whitlow’s exposés may help draw out the killer; he’s already incensed people with accusations of cheating via buzzers (devices that electrically shock horses during races) or performance-enhancing drugs. When Jim learns some of those accusations have merit, he connects Felipe’s death with other Churchill Downs crimes, which soon include a second murder.

Neumayer delivers an often lighthearted mystery. For example, scenes unfold at the backside like a soap opera; there’s the perpetually drunk groom, the horse trainer who scuffles with Whitlow over cheating allegations, and infidelity among married folks. Even Jim has a part in all this, having provoked a wealthy thoroughbred owner whose foolish son the private investigator humiliated (with good reason). The story likewise treats the detective genre playfully. In one of his articles, Whitlow mocks Jim for not donning a fedora or trench coat, and the PI later initiates a pursuit on a bicycle at moderate speed. The protagonist is good-natured and sympathetic; he takes Carlos’ case pro bono, despite a pile of bills, and suffers the authorities’ ire as they despise Jim, a former cop–turned–private eye. At the same time, he’s caught up in an effectively understated romance with veterinarian Dr. Freya Hall. She’s one of the cast’s myriad characters, many of whom make viable murder suspects and bolster the ongoing mystery. The author aptly develops each one against a vibrant Churchill Downs backdrop. Along with that comes abundant racing lingo, like the titular job, that the author subtly defines for novices without boring readers already familiar with it. Descriptions of Derby races, though disappointingly brief, are animated and memorable: “Right out of the gate, it was a mad scramble with five mounts no more than two lengths apart….All other sounds were quickly muffled by crowd noise. Manes and tails streamed behind like battle flags as the horses charged into the backstretch.”

A delightful whodunit with a remarkable hero and sublime Southern setting.