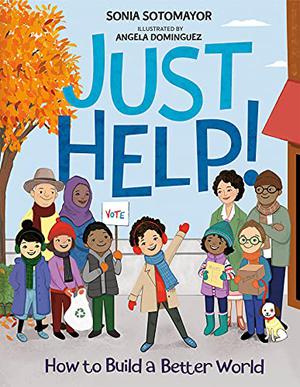 An Iranian-American author recasts an anecdote from the Persian poet Rumi, itself based on a far older tale about perceiving parts of a truth rather than its whole.

Javaherbin adds characters and plot to the bare-bones original and reduces Rumi’s lengthy mystical exegesis to a line. So curious are local villagers about the strange beast Ahmad the merchant has brought from India that they sneak into the dark barn where the creature is kept. Each returns with a different impression: one trips over the animal’s nose and announces that it’s like a snake, but it is more like a tree to one who feels its leg, and so on. Their squabble is so intense that they don’t even notice when Ahmad arrives to lead the elephant out to the river—leaving each with “only a small piece of the truth.” Yelchin outfits the villagers in curly-toed slippers and loose, brightly patterned caftans. He also puts a nifty spin on the story by leaving the adults to argue obliviously but surrounding the elephant at the wordless end with smiling, plainly clearer-eyed children. Though the language is bland, the wildly gesticulating figures in the illustrations add a theatrical element, and the episode makes its points in a forthright way. An excellent source note traces the familiar tale back to its earliest versions.