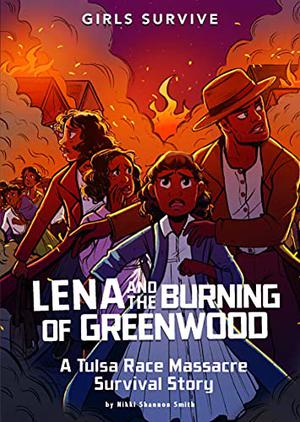 LENA AND THE BURNING OF GREENWOOD | Kirkus Reviews


In this moving story told from Lena’s perspective, readers learn about the African American community of Greenwood, Oklahoma, or Black Wall Street as it came to be known. Lena lives in Greenwood with her mother, father, and 16-year-old sister, Cora. Her father often reminds her that “we have everything we need in Greenwood.” They have shops aplenty, libraries, schools, parks, and, most importantly, a sense of community. One day, Lena’s family hears whispers about Dick Rowland, a local Black man who was accused of assaulting a White woman. As racial tensions heighten, the residents of Greenwood fear White retribution for the alleged assault. The book moves quickly through the hours leading up to the massacre of over 300 Black people at the hands of White mobs and ends with Lena’s family and her community trying to piece together what little remains of their lives. This well-plotted fictionalized account of the Tulsa Race Massacre geared at young readers is emotionally challenging but necessary. Smith’s narrative deftly captures a child’s emotional and psychological experience of the tragedy as well as the tenderness shared among Lena and her family members. Jenai’s black-and-white digital illustrations, which appear every few pages, depict only Black characters and help readers imagine the historical setting. The thoughtful, informative backmatter will help adults lead discussions with children.