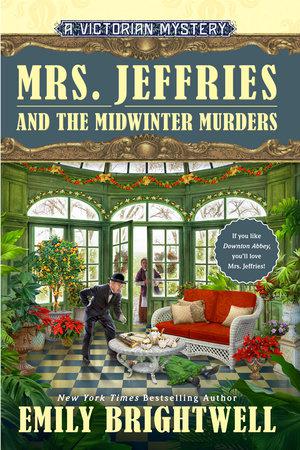 
Inspector Gerald Witherspoon of London’s Metropolitan Police has a stellar record of solving murder cases. The pleasant, independently wealthy Witherspoon never realizes that his success is due to the sleuthing abilities of his housekeeper, Mrs. Jeffries, his staff, and their friends, who have a spy network ranging from former crooks to aristocrats. When wealthy Harriet Andover is found strangled in a locked conservatory, her death poses a puzzle challenging for even the inveterate sleuths. She married above herself but kept a firm hand on the purse strings, annoying her husband and stepchildren, who all thought the money she brought into the marriage should be used to keep them in a style befitting their status. Also living in the house is Harriet’s nephew, an Episcopal priest from the United States, whom she had invited to stay while he researched a book, and a widowed friend of hers. The unlikely sleuths get help from Witherspoon’s assistant, who feeds the inspector the clues discovered by the group, while Mrs. Jeffries joins Witherspoon for sherry every evening and boosts his ego with well-placed compliments. The investigation indicates that the killer must be someone who lives in the Andover mansion. And indeed, every one of the residents turns out to have a motive. But which of them did the deed?