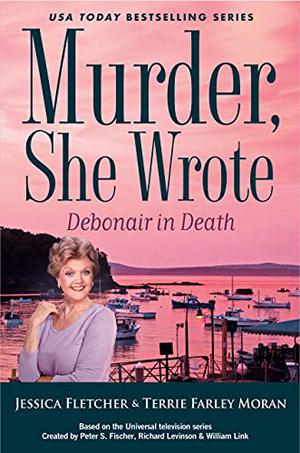 
Jessica Fletcher is back in her lovely Maine coastal town after solving a murder in South Carolina. Geographically speaking, she has become something of an equal opportunity sleuth, and when lothario Nelson Penzell, a newcomer to her hometown, is found battered to death in the art shop he’d bought a partnership in, she wastes no time setting out to prove that meek young manicurist Coreen Wilson is innocent despite having been found hysterical and covered in blood in front of the shop. With the help of Doc Hazlitt, Jessica prevents Sheriff Mort Metzger from questioning Coreen until Jessica can find her a lawyer. In the meantime, Jessica, with the aid of many of the Cabot Cove regulars, digs into the mystery herself. When her old acquaintance Michael Haggerty of MI6, caught trying to break into Penzell’s house, explains that he’s looking into an international smuggling ring, Jessica has to acknowledge that the case may be more complicated than she thought. Michael’s later admission that there may be more than simple jewel smuggling involved and that he’s after the kingpin Penzell was working for makes Jessica wonder whether Penzell was murdered by a castoff lover, a jealous husband, his unhappy business partner, or a deadly spymaster. Naturally, she won’t give up until the truth is revealed.