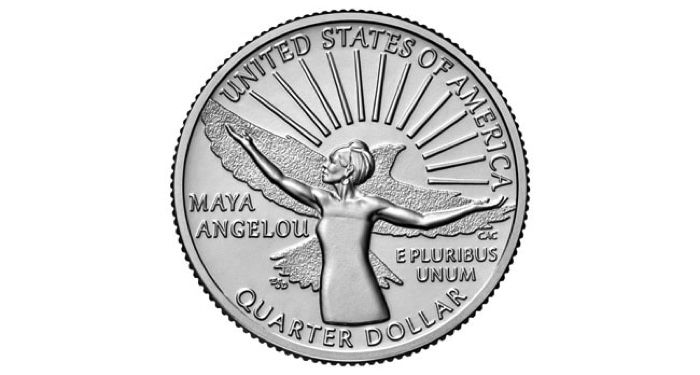 Poet and Civil Rights Activist Maya Angelou to Be First Black Woman on the U.S. Quarter

The United States Mint has announced that Maya Angelou will be the first Black woman to be featured on the U.S. quarter. The quarter will be the first issued as part of a program called “American Women Quarters (AWQ) Program” that will honor American women’s contributions to American history. Other women to be honored in 2022 through the program are: Wilma Mankiller, Sally Ride, Anna May Wong, and Nina Otero-Warren.

Mint Deputy Director Ventris C. Gibson said in a statement that “each 2022 quarter is designed to reflect the breadth and depth of accomplishments being celebrated throughout this historic coin program. Maya Angelou, featured on the reverse of this first coin in the series, used words to inspire and uplift.”

Angelou wore many hats as a poet, performer, activist, professor, dancer, and singer. She gained international acclaim with the 1969 release of her autobiography I Know Why the Caged Bird Sings, and would go on to publish more than 30 works, including nonfiction, fiction, and verse. She received the Presidential Medal of Freedom in 2010,  the Literarian Award in 2013, as well as an honorary National Book Award and more than 30 honorary degrees. She died at 86 in 2014.

The front of the quarters released as part of the AWQ Program will display a portrait of George Washington, while the backs will feature designs that are representative of the women being honored. Angelou’s has an image of her with her arms upifted, with her body over the image of a bird flying and a shining sun. These are all things the Mint says represent “her poetry and… the way she lived.”

Rep. Lee expressed how “the phenomenal women who shaped American history have gone unrecognized for too long—especially women of color.”

For those interested in the Maya Angelou quarter, the Mint recommends contacting local banks in “late January and early February.” Orders for a proof set of the coins may be also be made here.