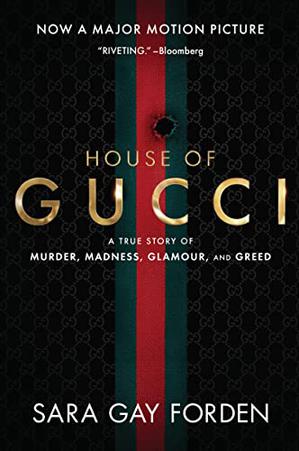 
Forden begins with a riveting description of the 1995 execution-style shooting of Maurizio Gucci, as witnessed by the doorman of his building. It’s an apt opener given the subtitle. About half of what follows lives up to that billing, and surely it is that half we will see in Ridley Scott’s upcoming film. The other half might be called “A True Story of Boardrooms, Lawyers, Negotiations, and Handbag Manufacturing.” Forden presents the decades of poor business decisions made by the family—as one lawyer put it, “We have to save Gucci from the Guccis!”—in meticulous detail. The author, a former Milan bureau chief for Women’s Wear Daily, does her best to bring the boardroom and banking scenes to life. She also gives a thorough account of the fashion side of the story, from the construction of the iconic bamboo-handle bag to the runway sensations of the “Tom and Dom” era (designer Tom Ford and CEO Domenico De Sole), which included a Gucci G-string. Perhaps the most outrageous of the many larger-than-life characters is Patrizia Reggiani (played by Lady Gaga in the film), a shameless gold digger who announced she would rather “weep in a Rolls-Royce than be happy on a bicycle” and blithely ordered the murder of her husband when their interests diverged. As her own lawyer put it, “This story makes a Greek tragedy look like a children’s story.” According to Forden, “the trial spotlighted the passionate, excessive lives of Maurizio and Patrizia in stark contrast to the gray squalor in which Pina and her three accomplices lived. And like the O.J. Simpson trial, which underscored divisive racial attitudes in American society, the Gucci trial highlighted the chasm separating wealthy from poor in Italy.”