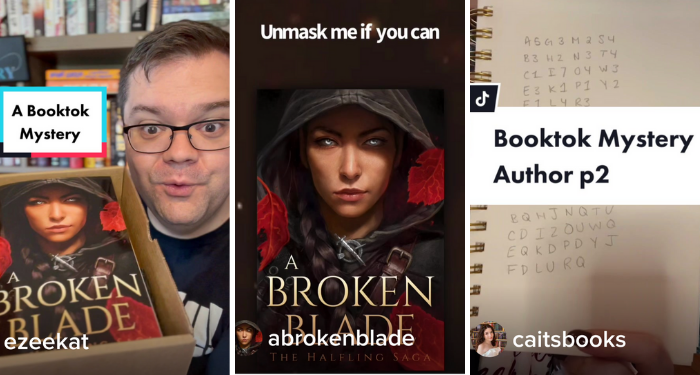 The Mystery of the Anonymous Fantasy Author Taking Over BookTok

Looking at the cover of A Broken Blade, it seems like a fantasy book that would blend in with any SFF bookshelf. Give it a second glance though, and you might notice something missing: an author. That’s deliberate. This book is written by someone on BookTok, the name for the book-focused part of TikTok. Their book has been sent to multiple prominent BookTokers, many of whom have posted rave reviews for it. Even more intriguingly, though, is that it promises to include clues to the author.

The first time I saw this book was in a TikTok by Jaysen @ezeekat, a BookToker with a large following, who documented his unboxing of the mysterious package:

The book came with a letter from the author, who talks about how BookTok inspired them to write this book. It also comes with a code, though not everyone got the same one. The book was signed and inscribed, and this inscription says that the book is authored by a fellow Disney nerd BookToker.

Several BookTokers are trying to combine clues to figure out this mystery. They managed to collect 5 clues, which they believe are all of them. Here is one video from CaitsBooks trying to brainstorm possible ways the clues could be interpreted:

This is just one of a series of videos this BookToker has done trying to put the clues together, so check out the parts, too! There’s also an A Broken Blade TikTok account that is dropping more hints, and it promises that we’re almost at the end: the author will be revealed this week, and the book will be republished with the author’s name on the cover.

There are more clues that may be red herrings, including that the books are published in Canada, suggesting a Canadian BookToker. They also have fewer than 200,000 followers.

If you want to get in on the fun, you might only have a few hours to try to crack the code yourself! One of the latest videos warns that the anonymous version of the book will be unpublished and not available for order at 3pm PST today, December 14th. (PST… is the BookToker from the west coast of Canada?)

This is such a fun way to add some mystery to a book promotion. Who doesn’t love a treasure hunt? I’ll be waiting with bated breath for the reveal — and to see how many people were able to guess correctly! If they know, they’re not shouting it from the rooftops. There are plenty of people sharing their brainstorming, though, so join in by checking out the A Broken Blade hashtag! Good luck!