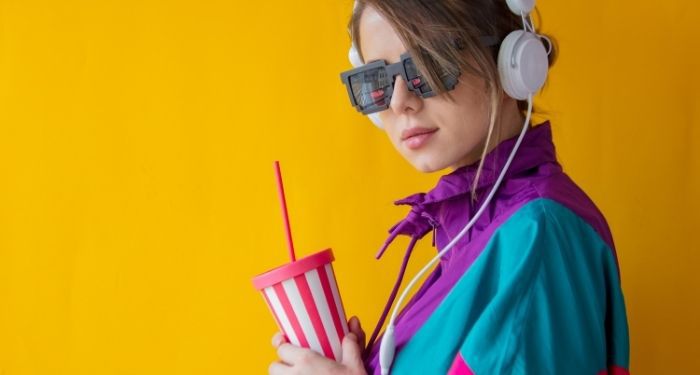 I remember when Coupland’s Generation X came out in the early 1990s and all the hype that came with it. I love all of the Instagram accounts posting throwbacks of the ’80s and ’90s, mostly because they capture my own childhood and adolescence. As someone on the very end of Generation X (yes, I will fight you on that), when I heard about Chuck Klosterman’s new essay collection, The Nineties, I knew I had to read it. (Also, can we take a minute to appreciate that cover? That phone was the phone to have — and it lit up when it rang. IYKYK).

The ’90s encompassed my middle school, high school, and half of my college years, which is a big span of time. Sassy was my favorite magazine (that Kurt and Courtney cover! The Sassiest Girl in America contest!), Riot Grrrl introduced me to zines and punk, Nirvana’s Nevermind changed music for me, and events like the signing of the Americans with Disabilities Act, the Rodney King trial and the L.A. Riots, the fall of the Berlin Wall, the Waco siege, the Gulf War, the Oklahoma City bombing and the Rwandan genocide, to name just a few, are all part of my childhood and teen years.

I grew up with Marky Mark — sorry, Mark Wahlberg — and Kate Moss doing THAT Calvin Klein ad (Moss later talked about how damaging it was for her emotionally), the rise of grunge (I still wear flannel shirts and Docs, thanks), and the scents of CK One, Sunflowers, and Gap Dream. Sure, there was Nirvana, but there were also The Roots, Pearl Jam, Liz Phair, Luscious Jackson, Green Day, Rusted Root, The Cranberries, 311, Veruca Salt, Hole…this was the soundtrack to my high school years. The Fresh Prince of Bel-Air, My So-Called Life, and ER were my favorite shows. Many Friday nights were spent picking out a few movies at Blockbuster and adding on some full-size movie theater candy selections.

But it was also a time when Monica Lewinsky, a college intern, became the scapegoat and a national punchline to protect the most powerful man in the country. Another woman, Lorena Bobbitt, also became a national joke after she cut off her husband’s penis. What everyone conveniently didn’t mention was the physical, emotional, and sexual abuse she testified that she endured from her husband. It wasn’t until years and years later, when I was much older, that I would realize what these women went through and how society failed them (and others).

Many books about certain time periods tend to idealize that time or only discuss the good parts. Klosterman manages to avoid sentimentality and provides cultural commentary and criticism while still showing just how much changed in the ’90s. Everything discussed is situated in the larger cultural and historical context. He explores music, politics (his discussion about Perot, Bush, and Clinton is especially interesting), and just how much the internet has changed things. He really shines when discussing movies like Falling Down (seriously, what was that?) and Kids, and how these films likely would not be able to be made now, for different reasons, and what those reasons say about how our world has changed.

It would be a mistake to only read his take on Gen-X attitudes about being cool without trying too hard and brush off the book. His insights into how the internet changed things is remarkable, especially about how it changed the ideas about being certain about something, missing things, and how we approach various issues. I know many people my age always talk about how grateful we are that social media didn’t exist when we were in high school and college, but this also got me thinking about what it was like growing up without the internet, without being bombarded with news, updates, politics, trends, and more 24/7, via a computer or phone.

Maybe shape is the wrong word — maybe it’s more like symbolize, or define. Yet by the time a book comes out, the generation is already defining itself, so it’s a tricky thing — but there’s no doubt that Coupland’s book Generation X impacted a generation. Before the book, the post-Baby Boomer generation was just known as twentysomethings. While Klosterman discusses this book and what the shorthand of “Gen X” came to mean, I think his own book will also help to inform the cultural discussion — if not of Gen X, then of this pivotal decade.

The ’90s encompassed A LOT. It would be unrealistic to expect any book to touch on everything. But that’s maybe my favorite thing about it, because as I read it, I remember things (mostly pop culture) that aren’t mentioned, but that the book has somehow jogged my memory about. Things like the book The Virgin Suicides (and the subsequent movie by Sofia Coppola), Crystal Pepsi, wearing those clay mushrooms and plastic pacifiers around our necks, JNCO jeans, the Alloy and Delia’s catalogs, and much more.

This decade feels so jam-packed to me with historical moments and events and pop culture milestones and contributions, that sometimes I feel like I could follow every nostalgic ’90s Instagram account and it still wouldn’t be enough. I’ve read other books about the ’90s, including Paperback Crush: The Totally Radical History of ’80s and ’90s Teen Fiction, ’90s Bitch: Media, Culture, and the Failed Promise of Gender Equality, and Girl Power: The Nineties Revolution in Music, and while these all were great, each focused on something more specific than Klosterman’s book, which is where I think his really succeeds.

(As an aside, Questlove’s book Music is History, while not specifically about the ’90s, does cover the ’90s. He explores the last 50 years, 1971–2021, through pop culture and diverse history and cultural events, along with how these intersect with his own life. It’s a fascinating book that examines how memories or themes of songs, for example, can conjure up memories of periods of time, or how certain pop culture events or music are intertwined with our own personal memories of where we were in our own lives).

No book is perfect, and writing about history, especially recent history, can be complicated. But these books can provide new insight into events, provide nostalgia and different viewpoints, and bring up tough questions that you didn’t think about while living through the events. I don’t think one book can fully describe a generation or a time period, but many of the books out now about the 90s are certainly worth the read.

Have you read any favorite books about the ’90s? If you’re looking for even more ’90s goodness, check out this post on books about coming of age in the ’90s, and this post about books to read if you loved Sassy magazine.