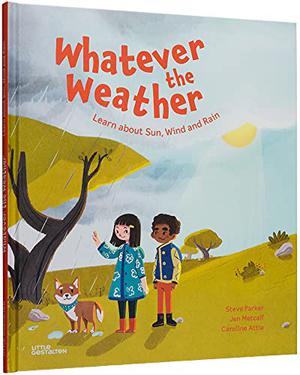 WHATEVER THE WEATHER | Kirkus Reviews

A detachable acetate eyepiece lets budding engineers peek into buildings, the inner workings of vehicles from bicycles to submarines, and even a human torso.

Peering through the colored spyglass embedded in the front cover at Lozano’s cartoon scenes makes large areas of red stippling or crosshatching disappear, revealing electrical wiring and other infrastructure in or under buildings, robots at work on an assembly line, the insides of a jet and a container ship, and other hidden areas or facilities. Though younger viewers will get general pictures of how, for instance, internal-combustion (but not electric) cars are propelled, what MRIs and ultrasound scans reveal, and the main steps in printing and binding books, overall the visual detail is radically simplified in Lozano’s assemblages of cartoon images. Likewise, the sheaves of descriptive captions are light on specifics—noting that airplane wings create lift but neglecting to explain just how, say, or why maglev train magnets are supercooled. Still, Wilsher introduces simple machines at the outset (five of the six, anyway), and the ensuing selection of complex ones is current enough to include a spy drone and Space X’s Falcon 9 rocket. Along with displaying a range of skin tones, the human cast of machine users visible in most scenes includes an astronomer wearing a hijab. All in all, it’s a revealing, if sketchy, roll toward David Macaulay’s The Way Things Work Now (2016).

Publisher: What on Earth Books