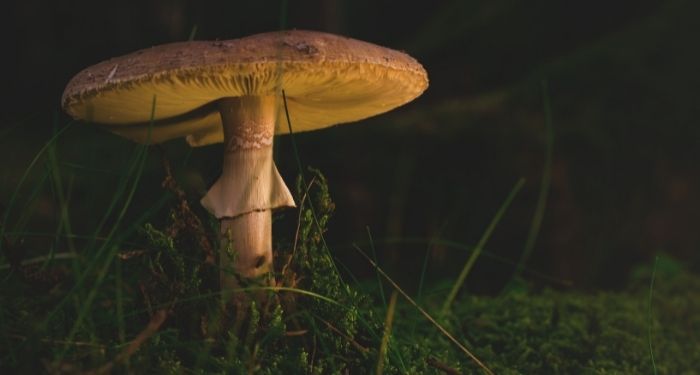 Why is Horror Obsessed with Mushrooms? | Book Riot

“It is not nice to think of children growing up like mushrooms, in the dark,” says Theodora in Shirley Jackson’s The Haunting of Hill House.

Mushrooms have long cast a strange shadow on our imaginations. Cultures all over the world have their own explanations for how mushrooms can just appear after rain, seemingly out of nowhere. They are things that appear in darkness, around dead things, around damp. For much of our history, they seemed inexplicable.

So much about gothic novels is rooted in the pervasive violence of old families, the darkness that lurks in the corners of a once-nice house. In The Haunting of Hill House, the house itself was built as an act of revenge, of ugliness, built at angles that weren’t meant to make sense. As in much of the gothic genre, the house itself is rotten. Something decomposes, deep at its core is darkness and damp. Only mushrooms can grow from that. Mushrooms are signifiers of the deep rot at the center of these places. And fungi can grow anywhere, can spread — can infect, like the darkness of Hill House can.

In his book Entangled Life: How Fungi Make Our Worlds, Change Our Minds, Merlin Sheldrake writes that when a country house called Haddon Hall was being renovated, “a fruiting body of the dry-rot fungus Serpula was found in a disused stone oven. Its mycelial connection wound back through eight meters of stonework to a rotting floor elsewhere in the building. The floor was where it fed, the oven was where it fruited.” The appearance of mushrooms in our gothic stories seems to serve as a kind of proof. A darkness, a dampness, a rottenness is part of the house: the mushrooms are its signal, the proof of a rot at its foundation.

Perhaps, too, these mushrooms expose the darkness, rot, having a life of its own, that we prefer not to see. Sheldrake points out that we think of soil as lifeless, when in reality it is teeming with life. We think of the ground beneath us as something static — and so the idea that it is actually full of a teeming, living network with something like intelligence, or that our air is full of fungal spores, is eerie.

In Mexican Gothic by Silvia Moreno-Garcia, the protagonist is trying to figure out what happened to her now-raving cousin in a mansion named High Place. The characters clearly don’t want her there. In the middle of the night, she wakes up and has a hallucination of mushrooms spreading in dark horrific fashion across her wall. Mold spreads throughout the mansion.

Noemí is a strong, stubborn Mexican woman confronting white supremacist eugenist men in English mansion High Place: darkness and rot are in the air itself, not solely in the foundations, but surrounding her, threatening her. The mushrooms are just the proof — but the darkness is everywhere. In her dreams, pale yellow mushrooms light the hall. She visits the cemetery and black fungus sticks to her palms. Neglect has overtaken the greenhouse, mold cakes the planters. She dreams of bulbous golden mushrooms growing on her wall and bursting like dust into her room.

The fungi running through the house in Mexican Gothic carries memory. “The fungus, it runs under the house,” says a character, “all the way to the cemetery and back. It’s in the walls. Like a giant spider’s web. In that web we can preserve memories, thoughts, caught like flies that wander into a real web.” It is in the walls and in the air. She is breathing it in without knowing it. It infects. The black mold spreads through the corners of her room. If you fight, a member of the family tells her, it will be worse. Give into the rot, and it will be easier.

“Everything they touch rots,” says a side character to Noemí. The house is rotting, but the frightening part is how alive that rot is. The mushrooms, the spreading mold, the inescapable spores, are what is so frightening: the idea that the inanimate is actually alive, watching, peering.

In the final installment of Netflix’s Fear Street, the adaptation of the Fear Street Saga series by R.L. Stine — spoilers ahead — a mysterious red fungus has been popping up around characters for two films. Now its origins are revealed. A young queer woman takes the proof of her girlfriend’s love, a small red plant, in her hand. She promises the villain that she will not let anyone forget, that she will spread signs of the rotting curse he caused, even after her death.

And the film shows the fungi spreading, its blood-red, blazing color permeating throughout the town’s entire foundations. In this case, the fungus is, yes, rising from her death. But it is also a signal, an insistence on life after her death, a reminder of her existence. It is a network, pointing towards a story, warning of darkness rather than a symbol of it.

Sheldrake tries to get us to think differently about fungi. Yes, they grow in the damp, yes, they take over decomposing bodies and logs. But also, they grow just about everywhere. Fungi can feed on radiation. They can be rehydrated after time in space’s vacuum. They are the ultimate survivors — maybe even the ultimate inspirations. Two children do grow up in Hill House, for better or for worse.

Noemí’s experience is terrifying, but the same fungi that infects her is what gives her the dreams that allow her to fight off the horrors of the house around her. Through the horrific networks of memory, she learns the truths of the family that is keeping her imprisoned. Even in the darkest of places, fungi will flourish. They will survive.

In Sorrowland by Rivers Solomon, fungi are ever-pervasive. It isn’t just a single house that is rotten in their southern gothic tale. It isn’t even just the cult town that protagonist Vern grew up in and escaped from. No: the very foundations of the United States are rotten here, soaked with the blood of Native Americans and Black people. And the fungus that is taking over Vern’s body is a direct connection to that history, that generational trauma of death: it is another case of the U.S. government experimenting on Black people’s bodies.

But Vern is not swallowed by the fungus. It becomes her armor. It is ugly, but it also teems with life. It is painful, but the spores she can release can kill or can communicate. She was infected, but she hasn’t turned into the weapon they wanted her to be. She is a survivor of all that they’ve attempted, and she is turning all of her power against their plans.

The presence of fungi in our gothic stories may be there to signal towards a dark rot, a living, teeming darkness at the foundations of a house or even a country. But the mushrooms that grow from it are also warnings. They are signaling to us. They are, in their way, a sign of life amidst murky darkness, a sign of the ultimate survival. If mushrooms can grow in such a seemingly dead place, then a person can grow, and survive, in the blackest darkness.