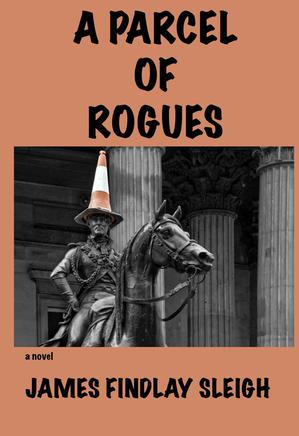 A PARCEL OF ROGUES | Kirkus Reviews


Gourlay Baines leads a meandering life—avoiding work and responsibility, engaging in petty theft and grift, and evading the landlord’s agent, O’Leary, always hunting for his perpetually late rent. Lucky for Gourlay, he’s a man of modest ambitions and counts himself rich when he has a pocket full of change. His “old crony” McMinn one day presents him with a business opportunity. Big Red, a giant of a man—“close to seven feet tall and his red hair, eyebrows and beard were so red that his massive head seemed to be on fire”—is paying cash for help with digging, the details closely guarded. As it turns out, Big Red is preparing a tunnel to a bank vault, a criminal gambit both Gourlay and McMinn participate in reluctantly. When that caper turns out poorly, they’re roped into a planned battle between Big Red and his nemesis, Sanny Rutherford. Scores of men turn out, but before a chaotic fight ensues, the two massed groups bond over their common Scottish heritage. The imbroglio gives Big Red an idea: “We need a common focus, a national focus, and by God!…By God! We have it already in the English! We’re a divided nation—Glasgow/Edinburgh, Catholic/Protestant, Highlander/Lowlander, myself and Sanny even….Linguistically-speaking, a farmer in Aberdeenshire likely has more in common with a Dutchman than a Sassenach….But is there a better uniting force than a common enemy?”

Sleigh farcically chronicles the formation of a group of freedom fighters, the National Army for the Liberation of Scotland, or “N.A.I.L.S.,” a comically incapable ragtag bunch. Gourlay and McMinn seem swept into Big Red’s ambition as if by a massive wave, reluctant but also unwilling to assert themselves. This lack of focused agency, the author cheekily implies, characterizes the desultory Scottish spirit, an ethos more likely to complain of oppression than to competently wage war against it. Gourlay isn’t so sure simply being Scottish means all that much to Scots and therefore doubts it as a significant identity, let alone a call to insurgent action: “Near everybody Ah ken is Scottish, but Ah’ve nae idea to what extent they’re really aware of their national identity, or whether they give a damn about that.” The group’s exploits are the stuff of vaudevillian comedy, the bumbling errors of the perennially distracted. Sleigh’s wit can cut to the quick, but is also deeply silly, and that lightsome but feverish tenor is very hard to keep fresh for the length of a novel, even one on the short side. Furthermore, the dialogue is presented in the thick argot of colloquial Scottish speech, and for the uninitiated, it can be a tedious slough: “Onywey, he coudna get intae ma breeks, so he took a sheet an’ happit himsel’ up in it….Bluidy daft if you ask me.” This is a funny book, one brimming with deliciously irreverent insights. But that’s not quite enough to compensate for the laborious translation it requires.