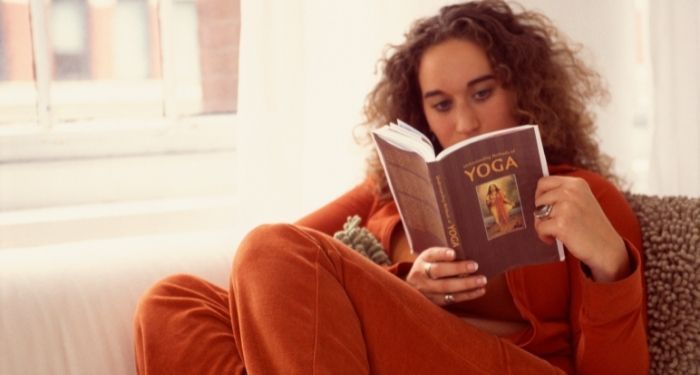 A Reckoning With My Yoga Books | Book Riot

I’ve been practicing yoga now for almost half my life — and for the past six years, I have been an instructor, accumulating over 500 hours of training and teaching classes in studios and gyms, church halls, and community centres all over London. When you’re a bookish type, years of teaching and learning means accumulating books, from universal bestsellers to small press pamphlets and journals. The shelf grows with your knowledge and you build a joyful little library of progress.

My first yoga classes were gentle and calming, an introduction to momentary peace that hooked me immediately. I know plenty of other teachers and students who tell similar tales: we do this because it worked when we first tried it. We felt calmer, stronger, more sure of ourselves. When I trained as a teacher in London, I learned to teach a vinyasa flow style, grounded in the Ashtanga Vinyasa teachings of K. Pattabhi Jois.

Though he died in 2009, Jois remains a pillar of the yoga industry, worth some $88 billion globally each year. His book Yoga Mala is on my shelf. His contemporary BKS Iyengar was named as one of the 100 most influential people in the world by TIME in 2004; he wrote Light on Yoga, a book so ubiquitous you’ll find on the shelf of almost every teacher.

I have other books too, like Jivamukti Yoga by David Life and Sharon Gannon, which I waxed lyrical about a few years ago. Or Yoga Nidra by Satyananda Saraswati, founder of the Bihar School of Yoga. I have a copy of The Yoga Sutras of Patanjali with commentary by Satchidananda Saraswati, most famous for opening Woodstock: “I am overwhelmed with joy to see the entire youth of America gathered here in the name of the fine art of music!”

Yes, I have loads of books by various gurus and masters. Aside from being heavy, you might ask, what’s the issue? The problem is that everyone I’ve mentioned so far has been accused of outrageous levels of abuse and criminality — some acknowledged and apologised for, and some still flying under the radar even now. Accusations of rape, physical and sexual assault, financial abuse, coercive control, humiliating and degrading treatment and extreme emotional and mental abuse have been trickling from the yoga community for decades. Until very recently, nobody was listening.

The next few paragraphs will make for grim reading, but there’s a darkness in yoga that simply isn’t talked about enough.

Though he looked like a sweet old guru when he spoke at Woodstock, Satchidananda Saraswati was accused of molestation in 1991, and a group protested with signs outside his hotel room with signs saying ‘STOP THE ABUSE’.

Elliott Goldberg’s The Path of Modern Yoga notes that BKS Iyengar was known among his students as ‘Beat, Kick, Slap’, a bastardisation of nominative determinism which pinpointed his long-term physical abuse of students.

Jois, creator of the phenomenon of Ashtanga yoga’s series-based practice, has been outed as a prolific sexual offender by Matthew Remski in Practice and All is Coming: Abuse, Cult Dynamics and Healing in Yoga and Beyond. In 2018, one of his victims noted she was assaulted three times a day by Jois when she practiced with him, and went to on do some quick fire maths, asserting that Jois “likely committed over 30,000 sexual assaults” in his years of teaching.

There are videos of Jois and Iyengar committing crime after crime against their own students; it’s on YouTube even now. I have watched Jois push himself against his students as he ‘adjusts’ them. I have stared at my screen as Iyengar screams at and slaps at the students who don’t perform well enough for him — while an audience looks on, unmoved.

Jivamukti Yoga was founded by David Life and Sharon Gannon, both students of Pattabhi Jois. In 2016 it was revealed to be home to cult-like abuses and humiliations. A lawsuit brought against a senior teacher for sexual harassment was settled for an undisclosed sum; in his book Remski has detailed the use of NDAs and bargaining tools like tuition refunds to keep students silent about the culture of Jivamukti training, which featured prospective teachers crawling on hands and knees to kiss the feet of Life and Gannon.

I have a copy of Richard Miller’s iRest Program for Healing PTSD — and his Yoga Nidra. Miller’s work, like Satyandanda’s Yoga Nidra, has been fundamental to the development of yoga nidra overall — yet Satyananda was accused of violent sexual assault and molestation of a child and Miller stepped down from iRest in 2021, having been accused of sexual harassment — which his organisation tried to brush over with an NDA.

Though I was lucky enough to avoid the wholesale horror of Bikram Choudhury, he is also an author, with several books available for sale even after the Netflix documentary which brought his crimes — sexual, physical, financial and emotional — to a broader audience.

My practice is still derived from everything I’ve read. In fact, my entire training is underpinned by the legacy of Pattabhi Jois, which makes me feel uneasy to say the least. At the same time, chucking it all in the bin won’t be an answer that’s widely adopted either.  Teachers have invested years of time and thousands in currency to develop something that can be shared, and when it’s shared well, with informed consent and community at its heart, it’s wonderful.

So what are we to do at this junction in the road? It is impossible to remove the creators from their creations and it is clear even now that the yoga industry has a long road ahead to create true safety for practitioners, casual or devoted. Throwing away any books feels to me like a sin — but using them no longer feels an option either. What do we do with the carefully cultivated asana practice taught by Jois? Are we never to try yoga nidra again? Should the millions of copies of Light on Yoga be mulched?

About a year after I started teaching, I found my own way of doing things. Jois may have created sequences, but I don’t have to follow them; nobody does. It is for us as teachers and practitioners to derive new ways forward, supporting each other in a practice where ethics simply has to come first.

Practicing yoga in my class means participating in a democracy. If my students don’t feel like doing something I’m instructing, that’s fine by me. I no longer offer physical adjustments; my students know their bodies better than me. Sometimes, if I’ve had a student for years and they ask for adjustments, we’ll talk about a method that suits us both. The yoga mat is a shared space and, unfortunately, a shared risk.

As the years have chugged on, I’ve become nervous of my approach. Shouldn’t I adhere to what I was taught? What if students don’t like my way of doing things? And then I remind myself: it’s a democracy and they don’t have to hang about if it’s not for them. And I don’t have to teach the way the predators wanted me to.

I haven’t thrown out the books I’ve mentioned here, though I haven’t opened any of them in many long months. Perhaps subconsciously I consider them a cautionary tale: it is all too easy to get swept away in the promises of a largely unregulated wellness industry.

Instead, I have been adding to my shelves. Uma Dinsmore-Tuli’s Yoni Shakti sets out a set of ethics that are intended to keep practitioners safe, and Theodora Wildcroft has published her academic research in Post-Lineage Yoga, an examination of what yoga can be when we practice solidarity both on and off the mat.

I’m looking forward to a future of publishing about yoga which is honest, based in good principles and open to dialogue and development. The most recent works cited here are by white authors, and I’m hopeful as time passes and more people come forward to discuss the problems in the yoga industry, we will see a broader array of voices in our yoga books too.

Coffee table books featuring pretty poses are lovely — but I want to read the much-needed books that will blow the roof off. My yoga books are no longer about poses, meditation and breathing. The shelf needs a new purpose: autonomy, ethics, solidarity. The manuals of the badly behaved will sit and get dusty, a reminder that what’s come before us must be understood if we’re to go forward in good faith.