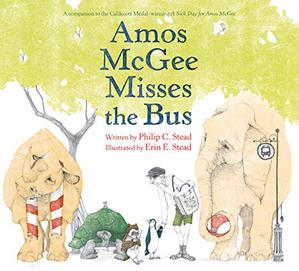 
As in A Sick Day for Amos McGee(2010), the gentle zookeeper ends up receiving care from the very animals he tends. The stories’ shared sentiment of mutual responsibility and care is one well worth repeating, and here it’s delivered in a book that stands on its own but benefits from familiarity with the original. This time, Amos McGee doesn’t need the animals’ help because he’s sick; instead, they come to his aid after a series of mishaps caused by his excitement about a planned outing. At the beginning of the story, the gangly, White zookeeper’s happy anticipation keeps him awake at night in a homey setting that will be familiar to readers of the first book, with its yellow-striped wallpaper and quaint furnishings. Overtired the next day, he dozes at the breakfast table and misses the bus. In his subsequent rush to the zoo, poor, groggy Amos McGee loses his satchel and a favorite hat. Once there, he’s so worn out that he literally falls asleep on the job. This is when the animals pick up the slack, with Philp C. Stead’s understated text detailing the responsibilities they earnestly assume, while Erin E. Stead’s sensitive, warm illustrations infuse subtle humor into the scenes. Pages depicting a tortoise’s earnest perambulation are perfectly paced. (This book was reviewed digitally.)