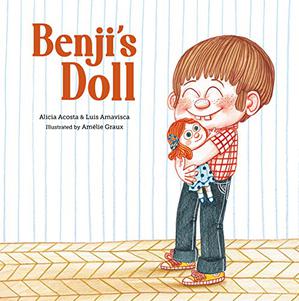 Initially, the protagonist is shown in his solitary world: “Scarecrow stands alone and scares / the fox and deer, / the mice and crows. / It’s all he does. It’s all he knows.” His presence is effective; the animals stay outside the fenced-in fields, but the omniscient narrator laments the character’s lack of friends or places to go. Everything changes when a baby crow falls nearby. Breaking his pole so he can bend, the scarecrow picks it up, placing the creature in the bib of his overalls while singing a lullaby. Both abandon natural tendencies until the crow learns to fly—and thus departs. The aabb rhyme scheme flows reasonably well, propelling the narrative through fall, winter, and spring, when the mature crow returns with a mate to build a nest in the overalls bib that once was his home. The Fan brothers capture the emotional tenor of the seasons and the main character in their panoramic pencil, ballpoint, and digital compositions. Particularly poignant is the close-up of the scarecrow’s burlap face, his stitched mouth and leaf-rimmed head conveying such sadness after his companion goes. Some adults may wonder why the scarecrow seems to have only partial agency, but children will be tuned into the problem, gratified by the resolution.

A welcome addition to autumnal storytelling—and to tales of traditional enemies overcoming their history.