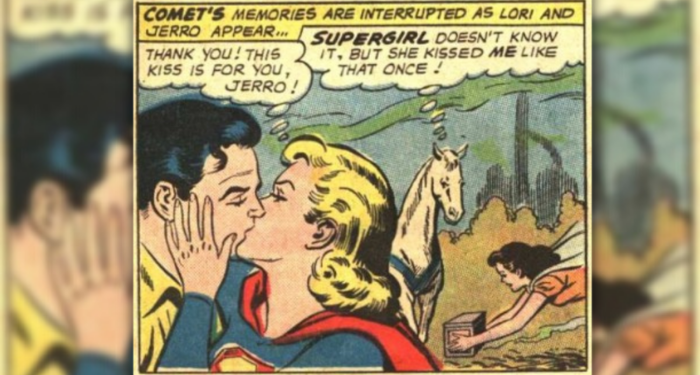 
It’s one of the better-known oddities of DC history. You see it crop up on lists of wacky comics history all the time: Back In The Silver Age, Supergirl Dated Her Horse! It’s the sort of old school zaniness with an undercurrent of tawdriness that modern readers love to chuckle over, like that one Batman story where the Joker says “boner” a few hundred times. But is it actually based on comics fact?

Well…yes and no. Yes, in the sense that Supergirl did have a romantic relationship with Comet the Super-Horse in the Silver Age. And no, in the sense that she didn’t know she was doing it, and so this is actually a story of a teenage girl being groomed and manipulated by a much (much, much) older man. Y’all, it’s creepy.

Comet was introduced in 1962, when the Superman franchise was going gangbusters and constantly adding more Super-characters in order to capitalize on its own popularity (Comet was the fourth Super-Pet added, after Krypto the Superdog, Streaky the Supercat, and Beppo the Supermonkey). After being teased in Adventure Comics #293 (February 1962), he was properly introduced in Action Comics #292 (September 1962).

In the story, Supergirl, in her civilian guise of Linda “Horse Girl” Danvers, attends a movie about a heroic horse. Linda is so excited by the movie she can barely sleep, and when she does, she dreams obsessively of a white stallion of her very own, with superpowers to match hers. It gets weird.

After days of obsessing over her fantasy horse, Linda goes on vacation to a dude ranch — and what should she find there but her dream horse, Comet! Not only is this wild stallion tame as a kitten for Linda and Linda only, he clearly A) has superpowers and B) knows she’s Supergirl. How can this be?

The incredibly convoluted explanation is given in the next issue, #293. See, Comet is actually an ancient Grecian centaur named Biron. One day, centuries ago, he saved the witch Circe from the evil wizard Maldor (you know how ancient Greece was full of…wizards…). In gratitude, Circe offered her a boon, and Biron asked her to turn him human. However, Maldor switched the vials, and she turned him into a horse instead. Womp womp.

Circe tried to make it up to Biron by giving him the powers of the gods, including the, uh, telepathy of Neptune, because apparently that’s a thing, at least to people who can’t tell the difference between Greek and Roman gods. Maldor, furious that his revenge had been thwarted, banished Biron to an asteroid in the constellation Sagittarius. Even though constellations aren’t made of asteroids. This origin is exhausting.

There Biron waited, immortal thanks to Circe, until Supergirl’s rocket passed by his asteroid centuries later and somehow broke the spell. He tracked his benefactor down and…well. Just watched her from a distance. And sent her dreams about himself to prime her for their meeting so that she would love him. He justifies it by saying that he just happens to know about an imminent alien attack on Earth and he needed her to trust him so that they could stop the aliens together, but come on. This is just telepathic grooming and it’s weird and gross.

But where does the dating come in, you ask? Well, in issue #301, Supergirl and Comet go on a mission to “Zerox, the sorcerers’ planet” (amazing). I’m not going to get into the ludicrous situation they fly into the middle of, but the short version is that they do a favor for the planet’s ruler, Prince Endor, and in gratitude, he enchants Comet to temporarily turn into a human whenever a comet is nearby. Also, there’s a whole thing where an evil wizard (again with the evil wizards!) attempts to trick Supergirl into drinking a potion that will turn her into a golden statue, but Comet saves her just in time, and catches her as she swoons. (Yes, she’s an invulnerable Kryptonian superbeing, but it’s the Silver Age and she’s a girl, so she’s still forced to swoon in the face of alarming situations. Sigh.)

Supergirl and Comet return to Earth, where a comet passes by almost immediately, turning Comet temporarily human again. He decides to get a job at a rodeo because why not, taking the name “Bronco Bill.”

Meanwhile, Supergirl shows up at the rodeo looking for her horse, and instead finds a man who strangely resembles both the archer who saved her life on Zerox and her horse. How weird! Anyway the rodeo makes them kiss, which seems weird to me but I’m no centaur-turned-horse-turned-human, so what do I know?

And that becomes our status quo for the rest of the Silver Age — Comet skulks horsily in the background of Supergirl’s life, occasionally turning human and messing with her, and we’re all just supposed to think this is…normal? Romantic? Unclear. (In one particularly tasteless story, he dons a turban to convince her that he’s a mystical fortuneteller, so we can add cultural appropriation to his tab.)

The “romance” reaches it zenith — or nadir — in #311, when Comet, overcome by his longing for Supergirl, time travels back to the past to ask Circe to try again to turn him human permanently. She agrees, giving him a potion that will turn him into a man once he returns to the 1960s.

Comet returns to the present, where he’s immediately dumped into a convoluted adventure where he suddenly gets horse amnesia, becomes an outlaw’s horse, turns human, remembers everything, borrows the outlaw’s clothes because he was obviously naked as a horse, is mistaken for the outlaw, flees from a posse, and eventually regains his Bronco Bill identity just in time to conveniently run into Linda Danvers on a school trip out west with some classmates. Whew!

An aggressively whirlwind romance ensues, which I guess her classmates just think is normal? I mean, issue #309 has Linda almost marrying her substitute teacher, so clearly age of consent wasn’t a concern for anyone in these stories. But she’s 16 and Bronco Bill is clearly an adult, so this is all pretty horrifying even without him being thousands of years old and telepathically manipulating her.

Sadly for Bill (but not for us), all that nonsense from before pays off with Supergirl becoming convinced that he’s really an outlaw and trying to arrest him, only to be thwarted by stumbling upon some kryptonite. Comet cries out to Circe for help, reaching her through her crystal ball (you know, like ancient Greeks had), and she transforms him back into Super-Horse so that he can save Supergirl from the kryptonite. The real outlaw is then arrested, and Supergirl is heartbroken that she chased Bronco Bill away with her accusations. Comet, of course, says nothing.

Comet continued to have adventures with Supergirl and the Legion of Super-Pets for the next couple of decades, although his appearances became rarer as comics grew more serious in the ’70s. He was retconned out of continuity, along with Kara Zor-El herself, by Crisis on Infinite Earths. A post-Crisis version of Comet was introduced in the 1996 Supergirl series, but this character is very different: a jockey named Andrew Jones was trampled by horses and rebuilt with equine DNA by a sketchy organization called the Stable, only to die trying to rescue a suicidal lesbian stand-up comedian named Andrea Martinez from an avalanche, causing them to merge into the Earth Angel of Love, a cosmic being with the powers of speed, flight, ice, and giving Supergirl a sexual identity crisis. You know, like you do. This version was also retconned out eventually, and since then Comet has been relegated mostly to non-speaking Easter egg roles, most recently in the current Supergirl: Woman of Tomorrow miniseries.

And yet that old “Supergirl dated her horse!” chestnut keeps being trotted out (horse pun intended). I’m not really mad at these 60 year old comics for being weird and creepy — such is the nature of the Silver Age. What bothers me is how this story of a teenage girl being groomed, manipulated, and lied to by a trusted adult is repeatedly referenced as a joke — and the joke is always on Supergirl. I know we’re talking about silly comics about a cartoon horse here, but this is hardly the only example of our culture creating a story about a young girl being oversexed and perverse when she’s actually a victim.

I love the Silver Age, and I clearly love making fun of the Silver Age. But let’s make sure our punchlines land where they should, yeah?