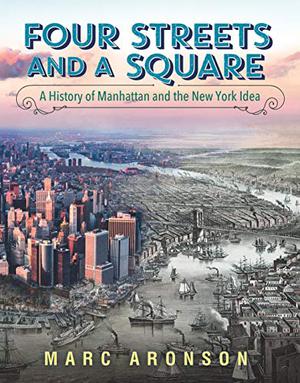 
From the Munsee and Lenape peoples to the Covid-19 pandemic, this book presents the history of Manhattan and the essence of New York City.

Centering the narrative around Manhattan, specifically the four iconic thoroughfares of 125th Street, Forty-Second Street, Wall Street, and West Fourth Street, historian Aronson transports readers through the vast and complex history of New York City in a vivid accounting of its cycle of birth, growth, death, and rebirth. Written in a conversational tone and broken up into manageable units and chapters with handy snapshot timelines and ample illustrations, this work has appeal for readers interested in the forces that have shaped this unparalleled global city. As relayed here, New York’s past is filled with stories of bravery, hard work, determination, and perseverance—as well as being rife with racism, classism, sexism, antisemitism, ableism, and more. Leaders, activists, politicians, and icons are not framed simplistically as heroes; instead, Aronson presents them as the real people they were—sometimes motivated by greed, hatred, fear, and desire. The narrative includes Indigenous people, colonizers, enslaved people, immigrants, queer people, and people of all genders, and it incorporates a broad range of subjects including the arts, sports, and education. This beautifully written book eloquently gives voice to the myriad people who built New York into the singular city it is today.