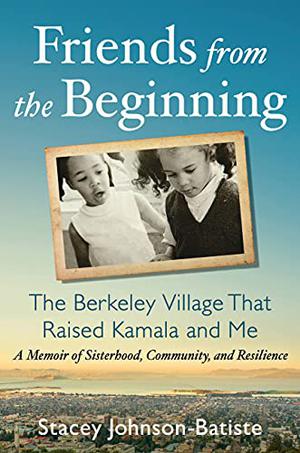 FRIENDS FROM THE BEGINNING | Kirkus Reviews


Johnson-Batiste makes her book debut with a paean to her friendship with the vice president, which began when the two were children growing up in Berkeley’s diverse, progressive community.

“Kamala and I,” recalls the author, “were raised among people who, if they saw injustice, determined that it was their responsibility to do something about it. This culture extended beyond core pillars who were like family, but these figures and their examples were no less inspiring.” Harris shouldered that responsibility even as a 5-year-old, when she fearlessly defended Johnson-Batiste against a bully. The girls were kindergarten classmates, but afterward, their educational paths diverged: Johnson-Batiste went to Catholic schools, Harris to a newly integrated Berkeley public school and to high school in Montreal, where her mother was a researcher. Although they were no longer neighbors, the author remembers Harris’ frequent visits, when the girls would catch up, and their closeness revived after Harris moved back from Canada. The author creates warm portraits of the men and women who were influential in her life and Harris’, including their respective mothers, Johnson-Batiste’s father, and especially Sherman Williams and Mary Lewis—Uncle Sherman and Aunt Mary to the girls—who were deeply involved in the civil rights movement. “One of my favorite traits about Kamala,” writes the author, “is her ability to ask clear, direct questions and then genuinely listen to the responses. She has always been the friend who is actually paying attention and listening carefully to what you’re saying—a trait due in part, I believe, to the influence of her countless conversations with Aunt Mary.” As adults, although they followed “very different life paths,” for several years in the 1990s, they were neighbors in the same condo building. Once Harris decided to run for district attorney, senator, and president, Johnson-Batiste, now a national sales channel manager at AT&T, volunteered to work in every campaign—and, with enormous pride, was a guest at Harris’ swearing in as vice president.

An affectionate homage to a treasured friend.