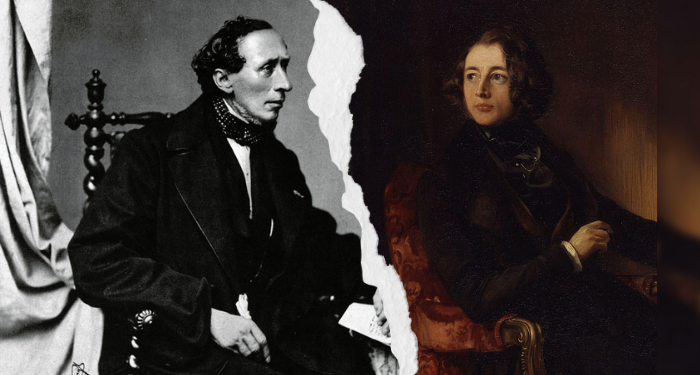 Hans Christian Andersen was a Terrible Houseguest & Other 1800s Gossip

Okay, so Hans Christian Andersen, Nathaniel Hawthorne, Herman Melville, and Charles Dickens walk into a literary salon. If this sounds like the opening of a joke, that’s by design, but like. Do you know about the bananapants, romantic, and tragic intersecting lives of these writers? LET ME FIX THAT FOR YOU.

You may have seen on the internet recently that Hans Christian Andersen once overstayed his welcome at Charles Dickens’s house and, on reading a negative review of his own work, had a tantrum in Dickens’s yard. This is true! Hans Christian Andersen was possibly the single most dramatic literary figure of the 19th century (please forgive me, Oscar Wilde). Of course, this drama came from a place of being largely miserable, and I feel in my tender heart that we all ought to feel sorry for him and invite him to come overstay his welcome.

The famous visit, which occurred in 1857 at the Dickens home in Kent, was intended to last two weeks but stretched to five. The Dickenses were, one assumes, simply too polite to ask him to leave. Upon arrival he announced that it was Danish tradition for male guests to be shaved by the male children of the host’s household; Dickens compromised by hiring a barber. The visit also involved a tantrum (again on the part of Andersen) upon realizing that Queen Victoria was attending a performance of Dickens’s play The Frozen Deep, at which Andersen was also in attendance, and the queen was not paying any attention to him, personally.

Andersen and Dickens had known each for ten years at the time of this dreadful visit. They met at a literary salon (probably) where Andersen called Dickens “the greatest writer of our time.” Whether he was flattered or merely polite, Dickens send Andersen a note and a dozen of his own books. After the visit, they maintained correspondence for a few years, but Dickens, though generally polite, was not able to fully refrain from telling his other friends about Andersen’s behavior. (It is also believed that he based Uriah Heep on Andersen, but David Copperfield was written in 1850, after their initial meeting but long before the infamous visit.)

Hans Christian Andersen was born April 2, 1805, in Odense, Denmark. He received minimal education, including an apprenticeship to a weaver, and left for Copenhagen at age 14 hoping to be an opera singer. He was unsuccessful when his voice changed from his pre-puberty soprano, but also allegedly due to his “ugly” face (“The Ugly Duckling” was written for himself). A friend advised him to try being a poet, and by 1822 his first story, “The Ghost at Palnatoke’s Grave,” had been published. After further education, he published both a novel, The Improvisatore, and his first volume of Fairy Tales for Children in 1835, at age 30.

Andersen never had any official romantic relationships, but was definitely queer; some historians believe he was asexual, though he certainly had romantic infatuations throughout his life — however, it seems that Dickens was not one of them. In his surviving letters, he declared his love (which was unrequited) to his friend Edvard Collin, describing his sentiments as “those of a woman,” and later to Carl Alexander, the hereditary duke of Saxe-Weimar-Eisenach, with whom he went on to have a romantic relationship.

He also nurtured a years-long infatuation with Swedish opera singer Jenny Lind, who did not return the sentiment. His story “The Nightingale” is believed to be inspired by her, and her nickname “the Swedish Nightingale” was in turn inspired by his story.

Meanwhile, on the other side of the Atlantic, novelist Herman Melville met fellow writer Nathaniel Hawthorne at a literary salon on August 5, 1850, in western Massachusetts. Melville was born August 1, 1819; Hawthorne July 4, 1804. They were 31 and 46 at the time of their meeting, and both married: Hawthorne married Sophia Peabody in 1842; Melville married Elizabeth “Lizzie” Knapp Shaw in 1847.

Smitten with Hawthorne, Melville wrote a 7,000 word literary review of Hawthorne’s short story collection Mosses from an Old Manse in leading New York journal Literary World. In case you are unaware, that is preposterously long for a review. Publishers Weekly reviews are around 200 words, for comparison (my source says 180 for regular reviews and up to 220 for starred reviews). Not only was it over-long, but the review read as a love letter not only to the book but to the author as a man, and included such sentences as “The soft ravishments of the man spun me round in a web of dreams.”

I suppose this is the man who wrote 900 pages of whale facts disguised as a novel, so I am not sure why I’m so surprised, but I am absolutely gobsmacked. But as Maria Popova says in The Marginalian, “Who hasn’t fallen in love with an author in the pages of a beautiful book?”

In fact, Melville went on to dedicate the whale novel to Hawthorne, with whom he had kept up a correspondence and visited frequently. On its publication in 1851, Moby-Dick received a “damning review in Literary World,” due largely to his depiction of a gay relationship between Queequeg and Ishmael. Hawthorne responded by writing that the review was obtuse and this was Melville’s best novel yet. Melville then professed his love more directly than ever before, which caused Hawthorne to pull away from the friendship. Only a handful of Melville’s letters to Hawthorne survive, and none of Hawthorne’s to Melville.

Melville lived another 40 years and lamented the lost friendship and love for all of them. Hawthorne died in 1864 and Melville wrote:

To have known him, to have loved him,
After loneness long;
And then to be estranged in life,
And neither in the wrong;
And now for death to set his seal —
Ease me, a little ease, my song!

Why are these stories so fascinating, going on 200 years later? Is it because of the human urge to gossip, to seek out drama? Certainly these stories would have made Andersen and Melville (and likely Dickens and Hawthorne, too) the daily main characters of Twitter if they happened today. But perhaps it is the human urge to seek out the same. We cannot know that these authors were queer, but I feel a kinship to their obsessiveness, their loves so deep that they behaved ridiculously about them.

If Andersen and Melville had lived in a time when being queer was somewhat less verboten — and if they were indeed queer — might they have been less dramatic in their declarations of love? Or were they simply men of enormous feeling, who expressed it the way they did because of their feelings, not because of their situations? We may never know.