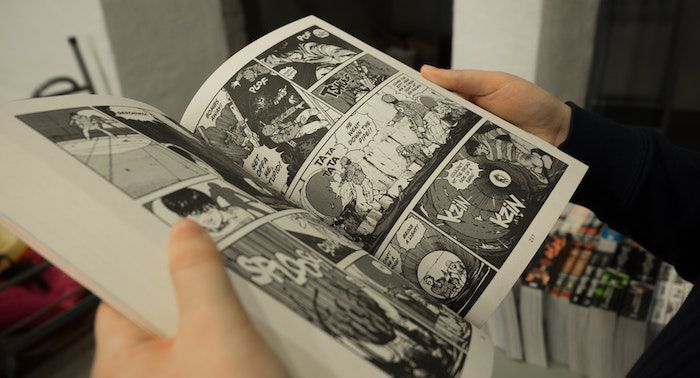 
I’ve been running a high school manga club for nearly eight years now and have certainly seen it rise and fall in popularity. Throughout it all we’ve had our core members and I’ve tried hard to ensure we meet every week after school.

Manga itself never fails to be popular. I cannot keep it on the shelves. The issues around manga is that they are expensive to purchase and there are sometimes zillions in a series. My advice is to purchase a few from each series and run the club to augment them.

It is an amazing way to bring students together and draw new faces to the library. Running a manga club takes a lot of time and effort but worth it in my opinion.

It’s a lot of fun but can be challenging to find activities for the students to do every single week. However, if you stick with it you will develop a dedicated audience that comes back day after day, week after week. Here are some of the activities that I have found to be most successful. They can also be adapted to any teen library club.

We watch a lot of anime. You’ve got to be careful as there is a lot of anime that is less appropriate for many younger students. My approach has been to ask students who are 11 years old to come in with notes when we watch an anime that is 12+. Having that conversation with their parents makes a huge difference. After the films, we usually have a quiz on it and try to a related craft. I also want to have students reviewing the films that we watch.

This was a recent game that we tried and the students didn’t want to stop. To start, I made paper dice. On one set of dice I wrote nouns like Troll, Alien, Boy, Girl, Dragon, Ghost and on the other verbs like Fighting, Laughing, Dying, Running, Flying, Crying. When I rolled the dice the students had five minutes to draw whatever came up. We then voted on our favourites. You can add whatever you want to your dice to make it as fun as possible!

Using a program called Canva I have students make their own manga-themed bookmarks. This is always a favourite activity. Full instructions on what settings to use in Canva can be found here.

We use Padlet to let students inform me what manga the library should purchase. However, there are a million different reasons to use Padlet. You can upload drawings, pose questions, provide links to competitions, anything you want!

This is an easy, free and fun way to bring in new students to your manga club. You split them into teams and give them a manga character or title to act out. It gets silly, rowdy and very competitive but it’s worth it!

Another free and easy game that the students loved. It’s kind of like Taboo. I split them into teams, and one member takes a piece of paper out of a jar. It could be a character, title, or anime. The student then had to get their team to guess what was on the slip of paper without actually saying the name that was written down.

Shiritori is a traditional Japanese game where you as a player are forced to say a word that begins with the last letter of the word spoken by the previous player. For instance, if player one says “Naruto”, player two must say a manga related word that starts with O, like “One Piece”, and so on. This gets very competitive and is always a good laugh.

The students are divided into two teams, and each team member “donates” the first & last letters of their first and last names to their group. Then, they are given five minutes to come up with as many manga-related things as possible using just those letters.

This one took some time. Essentially I used whiteboard tape and created manga questions on individual pieces of Jenga, then let them play the game as normal except they had to answer the question correctly or else put the piece back on the stack.

In the end, it’s about having fun. These are all things I wish my library had done when I was a kid. I want the students to get together and not have to think about school work or all of the other pressures out there.

If you’d like to learn more about manga, here are some great Manga YouTubers to watch. I hope these tips were helpful in starting your own manga club!