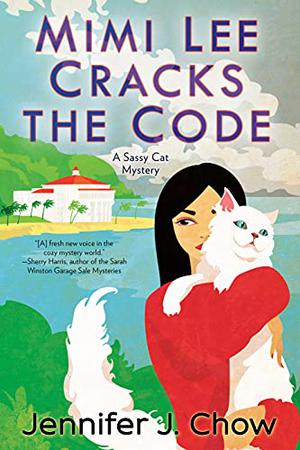 
In addition to her work as the CEO of her own tech company and the main investor in Hollywoof, Mimi Lee’s pet grooming business, Pixie St. James is joining the short-term rental market with a property she’s just bought in Catalina. And because the house is unbooked for an upcoming weekend, she offers it gratis to Mimi; Mimi’s boyfriend, Josh, a lawyer; and even Mimi’s cat, Marshmallow. It’s a great chance for Mimi and Josh to get away from it all. Catalina’s only an hour from LA by ferry but a world away in terms of lifestyle, and Mimi and Josh need a break from work, which keeps them from spending much time together. But after Mimi and Josh arrive with Marshmallow in tow, their vacation is essentially cancelled because Gertrude, Josh’s new paralegal, all but ensures that Josh has to burn the midnight oil on work responsibilities. If that weren’t enough to put a damper on their good times, an issue with Pixie’s latest renter, Davis D. Argo, shifts Mimi from couple time to investigative mode. Bad news about Davis’ fate connects Mimi with her old antagonist Detective Brown, though he may have become a bit gentler now that Mimi’s given him Nimbus the kitty to adopt. If nothing else, Mimi’s confident that her ability to telepathically connect to Marshmallow will help clear Pixie as she and Marshmallow dig into the case.