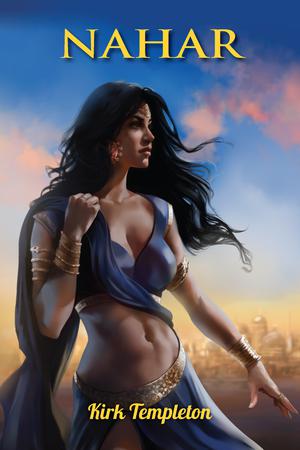 
A queen and her people fight back against oppressive, beastly warriors that have seized their city in this debut fantasy.

Queen Nahar rules the desert city of Samandal alone, having lost her parents by the time she was 18 years old. This prosperous city resides on crucial trade routes that unite various regions. So Samandal’s Great Council is understandably worried when massive, “semi-human” raiders, the Mrrrg, overtake a neighboring town—a “major nexus” for the trade routes. Despite its efforts, the Samandal army can’t stop the Mrrrg’s mighty Dragon Horde from seizing the city. Paramount chieftain and warlord Timur sets his sights on Nahar even before his Dragon Horde reaches Samandal. As is typical for a savage Mrrrg, Timur forces himself on Nahar only to feel something beyond physical pleasure. Nahar, too, senses a deep connection while shamefully enjoying sex, even when other men rape and, at one point, whip her. Meanwhile, the captive citizens plot an escape, and Bahadur, the leader of the city’s temporarily useless Household Guard, spearheads a rebellion to retake Samandal. He starts by disrupting the profitable trade routes, which Timur has been exploiting. But the paramount chieftain also faces dissension within the Dragon Horde; his love for Nahar is a sign of weakness that some Mrrrg will take advantage of. As battles against the Mrrrg and humans increase, Nahar discovers an unusual way to acquire power. She must nevertheless choose a side—take back her throne or love an enemy of both Samandal and the human race.

Templeton’s epic story teems with melodrama, sporadic action, and eroticism. Many readers will be put off or deeply troubled by the explicit sex scenes, as they involve a woman aroused by rape. Although Timur and Nahar aren’t the only characters who are featured, the sex scenes can be repetitive. But the author does skillfully portray this tale’s intriguing world, from the lands surrounding Samandal to the myriad characters. For example, Samandal’s women, who oversee the city’s politics and finances, plan the escape from Mrrrg control using “bribes and seduction.” In the story, good and evil aren’t easily defined; not everyone is innocent in Samandal, which has a dark underbelly where killers and thieves thrive. While Templeton rarely misses an opportunity to describe Nahar’s somatic beauty, the author proves adept at portraying various characters, including Kashi, a wizard: “Mustachios curled under his hawk nose, and his beard, black but streaked with white, reached nearly to his waist.” The narrative’s action comes in bursts, which are often effective and a further display of the sharp prose: “The steeds of both warriors, well trained and tried in war, fought as well, each sensing from the shifting of his rider’s weight where and when he meant to strike, and swerving to place him at best advantage without need for direction.” The final act takes an odd but not entirely unexpected turn, and the story ends on a surprisingly lyrical note.

A mythical, disturbing tale with impressive worldbuilding and a memorable cast.