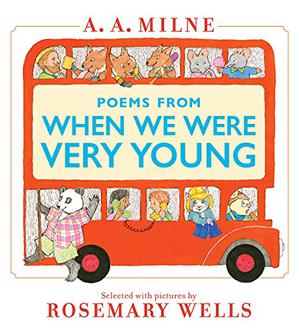 POEMS FROM WHEN WE WERE VERY YOUNG | Kirkus Reviews

Four-line poems introduce the numbers zero to nine opposite stylized, colorful mixed-media illustrations that incorporate them.

The relevant numeral is printed clearly over each poem and worked into the pictures, with dotted blue lines to help readers find them. This device sometimes works against itself. For example, the poem headed “3” reads: “Curve out and back in— / Do it once, then repeat: / A three is red pepper / On pizza. Let’s eat!” The poem is inviting, but the red pepper 3’s on the pizza slices opposite are obscured by the dotted blue lines superimposed on them. There are also three people to count and three tuning pegs on the banjo one kid plays. Those elements of the illustration are clear enough, but locating the numeral can be hard. Most pictures share this difficulty, although some, like the two balls of the snowman representing 8, are easier to spot. (Eight children play around the snowman, and there are eight pieces of coal marking its features.) The pictures include people with varying skin tones. In acknowledgment of the difficulty of the concept, a concluding double-page spread with number shapes incorporated into the composition is followed by an identical spread with the number shapes circled for readers to confirm their guesses. The rear endpapers offer each numeral with a corresponding number of thumbnails from the appropriate earlier spread for extra practice.

Hard-to-find numbers make this counting book one to skip.