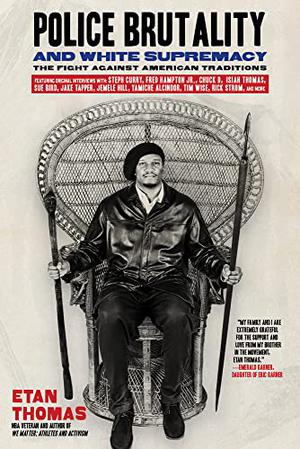 
Activist and former NBA player Thomas follows up his 2018 interview collection, We Matter, with Q&As informed by the turmoil of 2020 and 2021, with a similar assortment of interviewees: athletes (Isiah Thomas, Steph Curry, Breanna Stewart), media figures (Yamiche Alcindor, Jake Tapper), and family members of Black men killed or brutalized by police (Willie McCoy’s brother, Rodney King’s daughter). The prompts for discussion include George Floyd, defunding the police, the January insurrection at the U.S. Capitol, and the intersection of White supremacy and evangelical Christianity. The overall tone of the interviews is skeptical and dissatisfied with the lack of systemic change despite growing media attention. When Thomas tells the son of Black Panther Fred Hampton that “after Trump, Biden was a breath of fresh air,” he snaps back, “I still ain’t breathing.” The sharpest rhetoric comes from activist and broadcaster Marc Lamont Hill, who pushes against softening the phrase “defund the police,” likening it to shifting from abolishing slavery to “reform the plantation.” Trumpism, most of Thomas’ interlocutors agree, is just a more visible manifestation of White supremacy that’s been part of American life from the start. Though the intensity and relevance of the conversations are clear, especially with members of victims’ families, Thomas rarely sees his role as more than teeing up his interviewees to share experiences or familiar talking points, which blunts the overall impact. That’s why his Q&A with entrepreneur and NBA team owner Mark Cuban stands out: Thomas actively challenges Cuban to use his wealth and position to extract meaningful change from police and fellow team owners, and Cuban’s earnest but evasive replies reveal just how steep the challenge is. Other interviewees include Sue Bird, Rex Chapman, Chuck D, and Jemele Hill.