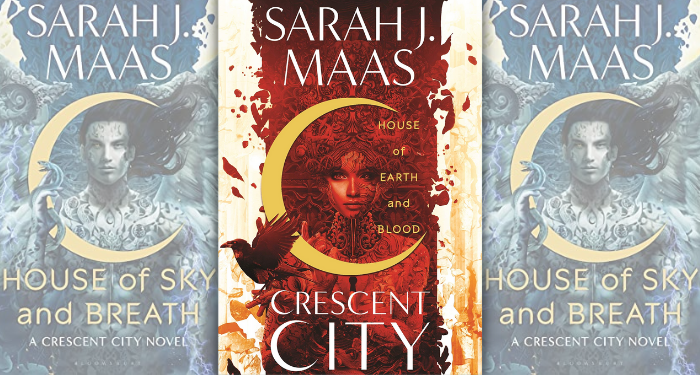 Previously, in Crescent City: Everything You Need to Remember for Book 2

As an avid reader of Sarah J. Maas and her series and books such as A Court of Thorns and Roses, to her YA fantasy Throne of Glass, I was excited to dig into her urban fantasy book Crescent City: House of Earth and Blood. While it’s a thick and heavy tome, I really enjoyed getting to know the stories and characters. With that said, Crescent City #2: House of Sky and Breath is set to release on February 15, so I have taken on the task of preparing a recap for you where you can best understand what happened in book one, to get you ready for book two.

So, expect many spoilers below!

The novel begins with introducing us to Bryce Quinlan, a 23-year old half-Fae who spends her days working at Griffin Antiquities, a quaint little shop in Crescent City. Bryce is accompanied by Jesiba Roga, an enchantress; Lehaba, a fire sprite; and Syrinx, a chimera.

We discover a lot of characters in the start of the novel, including Bryce’s bestie, Danika, who is the granddaughter to the Werewolf Prime and alpha to the Pack of Devil, and Archangel Micah, Governor of Crescent City and wider Valbara.

Also, in Crescent City, different packs and groups rule and there is a definite strain obvious between different creatures that reside there. Danika and Bryce are dealing with Philip Briggs, a villainous entity, who was caught by Danika’s pack trying to blow up a nightclub to ignite the war between humans and vanir, the creatures with magic and lengthy lives. Once Briggs is taken out of prison, Danika decides that it’s time to meet with Micah and see what’s up with that.

After this, we learn that not only Micah rules the city, but there are other heads of different districts that also assist him. In part one, we also learn that Danika and Bryce are not yet fully immortal, but hope to become so when they turn 27. Bryce has human qualities instilled in her, so her power will not be as strong as Danika’s and could lead her to danger. This also could prove dangerous in her recent task given to her by her store colleague, Jesiba, which includes finding an ancient Fae relic, known as Luna’s Horn, which was recently stolen.

One night, Bryce gets ghosted through text by Danika, which is unlike her, so she heads to her bestie’s place and finds her and the rest of the group killed. Shocked, she sees a demon escaping from the scene and trying to kill a fallen angel, so she tries to protect the angel and is caught by two other ones, who place her in a cell.

Towards the end of part two, we meet more characters, such as the two that took Bryce into the cell: Isaiah, a ruthless leader, and the brooding Hunt Athalar, who is also known as Micah’s personal assassin. They were part of an angel rebellion 200 years ago, and once the rebellion did not work, they were known forever as fallen angels. Meanwhile, Bryce is completely devastated at the loss of her best friend, and when she’s finally released from the cell thanks to a mysterious call claiming she’s got a distant Fae cousin, she comes out to the news that Briggs was again arrested for the recent murders, and that she’s not welcome at Danika’s funeral. Tragic, for sure.

Part two begins two years after Danika’s funeral. Bryce quickly learns from Hunt and Isaiah that one of their friends was recently murdered and found with the exact same injuries that Danika suffered. This leads to Hunt being assigned as Bryce’s protector to investigate the fact that Danika’s murderer might still be around. Micah assigns him to the task, since he technically owns Hunt after he got him from former powerful owner Sabriel after the angel rebellion bombed, and Hunt’s debts to Micah would go down significantly if he solves the mysterious killings.

What follows, in usual Maas style, is a mix of action and drama, as Bryce and Hunt team up to get to the bottom of the murders. Also, remember that artifact that Bryce was tasked to find, the Luna’s Horn, the ancient Fae relic? Turns out other creatures are after this artifact as well, and it might just be connected to all these grisly murders happening in their city. There’s also tension between Bryce and Hunt, and at one point a disagreement leads to Bryce almost being killed in another bombing, which makes Hunt decide to move in with her to protect her at all times.

During this time, there’s a ton of other suspects, as well as other killings, and we learn that Briggs had nothing to do with it all. Towards the end of part two, the main suspect is Sabine, Danika’s evil mother, but they need more evidence to prove it. A whirlwind of events follow in parts three and four, Sabine is confronted by them, and she tells Bryce that it’s her fault that her daughter was killed.

Hunt and Bryce also team up, kiss, and realize they have feeling for each other, which is not a surprise after prior obvious romantic tension. Bryce is also accused of owning the Fae Horn artifact, and they find out that Danika was apparently dealing synth, a dangerous drug produced by Redner Industries that has the power to summon demons and turn humans violent against others. Bryce also loses her apartment to a fire, and begins to question Hunt, thinking he’s dealing drugs (synth), but he tells her that Danika stole the formula as well as the stock and sold it years ago, which is probably what led to the killings. Hunt ends up locked up, and Bryce is really not wanting to see him again after all this drama.

In the last part of the book, Hunt is in jail, and while Bryce is still really upset at Hunt, she decides to try to buy him from Sandriel, who now owns him again. Sandriel refuses her offer, which leads to Bryce offering herself to be purchased instead to free Hunt. That’s when she finds out she’s actually the powerful Fae Autumn King’s daughter and that Micah has been after the Fae Horn and its powers all along and is not the nice guy you might think he was. Turns out, Bryce IS the Horn, thanks to Danika stealing it once, grinding it to dust, and mixing it with witch ink and tattooing it on Bryce, which she does not remember.

Micah was a long-time investor in Redner Industries, and Danika was simply trying to protect other half-humans and humans, like bestie Bryce, by keeping an eye on the synth experiments: she was innocent. Micah injects Bryce with synth, in order to summon the powers of the horn inked in her, and releases the demonic power. Bryce rushes to get an antidote to protect herself at Jesiba’s store, and when Micah follows her, she kills him. Once outside, she realizes her Horn activation has led to all seven portals and its demons being released and there’s no way out of the city. Bryce also discovers that she is a powerful heir to the Starborn Fae, a legion of extremely super powerful Fae, a secret her mom and Danika knew.

In the end, it is Bryce who saves the day with her super powers, as she closes the powerful Gate that connects to the seven portals and stops the demons from infiltrating, and Danika’s remaining soul spirit saves her from death, as Bryce is brought back to life after using her newfound power. Also, Hunt is pardoned and freed, but they are both warned that they should never speak of the Horn in exchange for being pardoned from all of their past killings, such as Micah and Sabriel, who Hunt also killed to save Bryce’s powers.

Whew! So yes, that is Crescent City #1 in a nutshell, a book which I could go on all day long explaining it and breaking it down. But there’s no time for that! Also, dear readers, we are almost at the release of book two, which begs a few questions for us to ponder. Will we get more romance between Hunt and Bryce? Will they be able to stay quiet about all the betrayals and recent happenings and protect their own lives? I have a feeling yes on the romance, not on the staying quiet, because if not, why would there be a book two? I am looking forward to seeing what’s next.

Did you read this book? Did you enjoy it, or not so much? Are you looking forward to book two? Feel free to tweet at me @AuroraMiami with any thoughts or scenes that you liked that I might’ve not mentioned above. Happy reading!