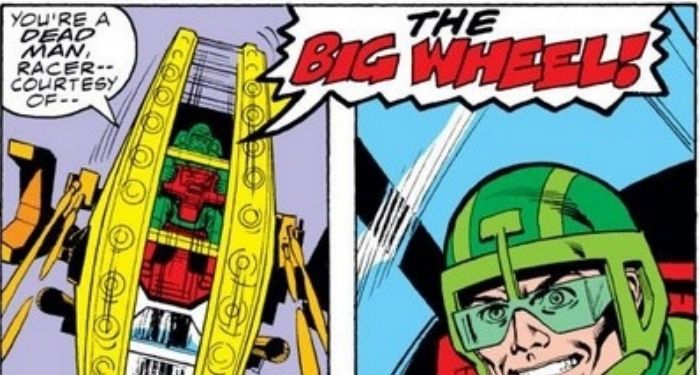 
What is a superhero without a supervillain? Not much. Some supervillains, however, are worth a lot more than others. I have therefore decided to spotlight some lesser-known villains. Are they underrated gems or irredeemable losers who deserve to be forgotten? You decide! Today’s subject: Big Wheel!

We don’t know what business Jackson Weele was originally in. All we know is that he was busted for embezzling and failed to destroy incriminating paperwork before he went into hiding. So he hires a minor villain, Rocket Racer (who I should also profile one of these days), to steal the paperwork for him in Amazing Spider-Man #182.

Unfortunately, Rocky has a sick mother and needs cash and is also kind of a jerk. He attempts to blackmail Weele for more money, but Weele has plans of his own. Upon paying a visit to the local evil gadget creator, he emerges as Big Wheel. Because his name is Weele. So the gadget creator made a giant metal wheel for him. It was a simple time.

While the wheel is admittedly pretty badass — it’s able to drive up the side of buildings and absorb missiles without a dent — it’s still pretty silly-looking. Then there’s the fact that Weele didn’t take the time to learn how to use it properly and supposedly drowned after shooting right off the edge of a building into the river. No wonder this dim bulb couldn’t get away with embezzling.

This seemed like the true end of Big Wheel for a long time. In 1987, he was even listed as a forgotten villain in Web of Spider-Man Annual #3. But somehow, he managed to not die on his first time out after all.

Big Wheel survived his dip in the river because his wheel is watertight — a fact he himself was unaware of because, again, he is completely incompetent. This issue really leans into his being a loser, in the best way possible.

After his supervillain stint, Weele decided it was time to stop running from the law and pay for his crimes. This cost him his wife and, for a few years, his freedom. After leaving jail, he was determined to make amends and tried to help Spider-Man capture a couple of supervillains. It went poorly.

Fortunately, however, New Yorkers love rampant destruction, and Weele found a new life as a monster truck driver. That is the best conceivable outcome and I could not be more delighted.

After “falling off the wagon” and getting into weapons smuggling in Invincible Iron Man, Weele returned to his life of crime. On one occasion, he was recruited by a rogue angel named Zadkiel to kill Ghost Rider and his brother before they could find the Antichrist. It’s kind of like Good Omens but not funny. And Big Wheel, despite getting some good hits in, still has yet to bag a win.

I can’t believe I typed all that with a straight face, honestly. Out of all of Marvel’s villains, Big Wheel is the last guy I would have expected to turn up in a dang Ghost Rider comic. This was such a bizarre appearance, and I don’t know what they wanted to accomplish by it. To make us take him seriously? If so, they immediately undid it with his (far superior) appearance in Spider-Woman, where he tries to steal some llamas.

In fairness, his llama stealing was done at the direction of another villain who was holding an unnamed relative of his hostage. I don’t know who that relative is — his ex-wife, maybe, or a heretofore unmentioned child? — but he clearly has someone somewhere that he cares about.

Deadpool & the Mercs for Money #4

Once again, we find Big Wheel loosely teamed with a bunch of other villains to take out a specific target: this time, it’s Deadpool and his friends, who are trying to sell a robot that tells the future.

This time, however, Big Wheel would not survive the fight. After another villain fell off his motorcycle, the bike, purely by chance, flew into Big Wheel’s path and threw him off balance. The last we saw of him, he was rocketing off a cliff while on fire.

I must admit that this is a very on-brand way for him to die. But hey, who knows? Maybe his wheel is fireproof too and he just doesn’t know it yet.

A new Big Wheel briefly appeared in Amazing Spider-Man in 2018, and I do mean briefly. He’s still pretty much a loser who can’t control his tech, but he has even less personality than the original.

There’s also a bit of confusion regarding Weele’s real name. In Spectacular Spider-Man #21, published before the character returned to comics, the Human Torch claims the former Big Wheel is working as a bar security guard and that his real name is Axel. (Get it? Because his surname is Weele!)

All of this information was disregarded in later comics, though I guess it’s possible that the security guard job was one of Big Wheel’s early attempts at reform that didn’t pan out. Maybe he drove his wheel to work one day and flattened the boss’s car.

An absolute loser, and that’s the way I like it.

When creators try to turn him into a serious threat — and by serious I mean “not funny,” not serious as in giving him a real chance of beating anyone at any point in his career — he ends up getting lost in the crowd (despite, you know, the giant wheel). He’s just not Serious Bad Guy material.

My favorite Big Wheel appearance is in Spider-Man Unlimited, when he’s trying to do good deeds and failing horribly. If the original Big Wheel ever does come back, I hope that’s the direction Marvel goes. It’s not often we get to see a villain making a real, sustained effort at reform, and it’s clear from this issue that he has far more potential as an aspiring do-gooder than a generic lackey or a villain in his own right.

Of course, the real loser here is Spider-Man, as usual. All these appearances by Big Wheel and he doesn’t reference “Proud Mary” once? Shame on you, Parker!

Want to meet more overlooked villains? Check out my profiles on King Tut, the Matador, Peek-a-Boo, Man-Killer, and Mad Mod!