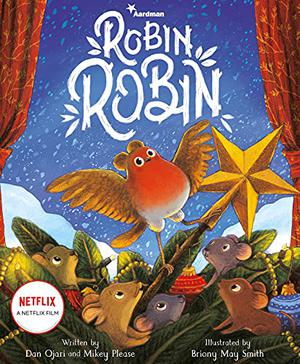 Reynolds and Brown have crafted a Halloween tale that balances a really spooky premise with the hilarity that accompanies any mention of underwear.

Jasper Rabbit needs new underwear. Plain White satisfies him until he spies them: “Creepy underwear! So creepy! So comfy! They were glorious.” The underwear of his dreams is a pair of radioactive-green briefs with a Frankenstein face on the front, the green color standing out all the more due to Brown’s choice to do the entire book in grayscale save for the underwear’s glowing green…and glow they do, as Jasper soon discovers. Despite his “I’m a big rabbit” assertion, that glow creeps him out, so he stuffs them in the hamper and dons Plain White. In the morning, though, he’s wearing green! He goes to increasing lengths to get rid of the glowing menace, but they don’t stay gone. It’s only when Jasper finally admits to himself that maybe he’s not such a big rabbit after all that he thinks of a clever solution to his fear of the dark. Brown’s illustrations keep the backgrounds and details simple so readers focus on Jasper’s every emotion, writ large on his expressive face. And careful observers will note that the underwear’s expression also changes, adding a bit more creep to the tale.

Perfect for those looking for a scary Halloween tale that won’t leave them with more fears than they started with. Pair with Dr. Seuss’ tale of animate, empty pants.