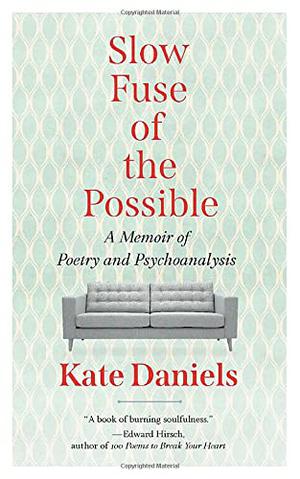 
“Rummaging about in the unconscious…can be downright terrifying,” writes Daniels early on in this deeply personal plunge into psychoanalysis and the art of poetry. The author moves back and forth between prose and poetry, with Emily Dickinson as her “literary companion throughout.” Wracked by a “direly intractable midlife depression,” she embarked on therapy: For four days per week over the course of nearly three years, Daniels visited Ama, a taciturn, middle-aged novice psychoanalyst. For the first few months, it didn’t go well; there was mostly silence, and she hated Ama’s small, ugly office. Daniels came to her the way “a muddled writer will seek out an editor,” hoping she could find the “Words” to repair a broken “Sentence.” Ama’s laughter—chortles, chuckles, snickers—tortured the author, and she began “falling into something that felt like a lyric poem’s black hole of atemporality.” Eventually, Daniels asked Ama to read some of her poetry books, but she refused. Turning the tables, she wondered if Ama wanted to write poetry. Was Daniels “writing” a “text” with Ama? In a “previous life,” had she “become the ghost lover of Ama?” After two years, the author fully believed that she and her analyst weren’t “connecting warmly.” Yet it “had become impossible to ignore that there was Something Inside Me that needed Ama desperately.” Reaching out to Dickinson for support, she also began to realize that her analysis was “full of dreams of Ama.” Describing to an unimpressed Ama a violent home invasion only left Daniels with an “extreme psychic unrest that my psychoanalysis unleashed in me.” She met briefly with a “Famous Analyst” who said her “analysis might be ‘imploding.’ ” The narrative, sometimes disjointed and loaded with heavy introspection, may tire some readers by the end, but Daniels is a keen observer of visceral moments and powerful emotions.