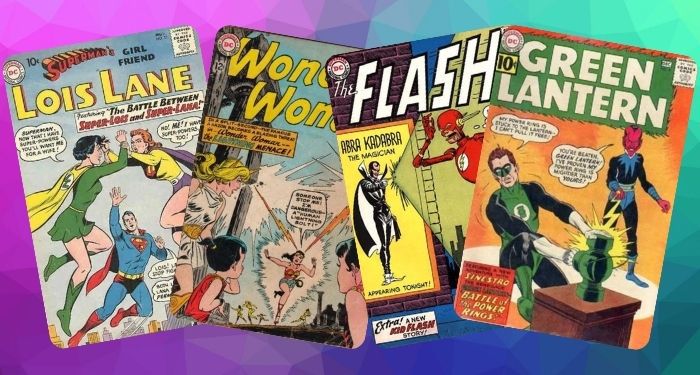 
The late 1950s and early ’60s were a tough time for comic books. Superheroes had fallen out of fashion for several reasons, and even the biggest names were hanging on by their fingernails. What to do?

If you’re Marvel, you revolutionize comics with a slew of new super-creations who define the genre to this day. If you’re DC, well, you’re not that brave, quite frankly. The Silver Age is a time to retreat into ridiculous yet innocuous stories until two things happen: the forces threatening the comic book industry go into retreat, and the people reading comics grow up and develop an appreciation for more grounded stories.

With that in mind, as a ’60s DC superhero, it is your job to be as inoffensive (by contemporary standards) as possible. This may mean getting a little bonkers, but that’s the price of survival. It won’t always be pretty, but if it gets you through the hard times while entertaining children and adults with a weird sense of humor, is it really entirely bad? If you’re looking for ways to ride out the waves of scandal and low sales, here’s what you’ll need to make it to the end of the decade, when superheroes began to take themselves seriously again.

By this point, many superheroes had been forced out of business, so to speak, either due to changing tastes or public backlash. When superheroes started getting popular again in the late 1950s, instead of bringing back the old heroes, DC completely revamped them for a new audience. The Flash and Green Lantern are perhaps the most successful examples of this strategy.

Please note the extreme blandness of these panels, from Barry’s haircut to the little carton of milk beside his sandwich. We’ll talk about that kind of thing more later.

The Atom also took the name of a previous hero, but Ray Palmer didn’t have as much in common with Al Pratt: while Ray gained the power to shrink at will, Al was just a short guy who liked to punch people. But the second Atom’s success goes to show the flexibility of The Complete Makeover strategy.

Fighting crime is hard. You’ll probably need a little assistance from time to time, and who better to call on than your very own mystical fanboy! This concept actually goes back a ways: Superman’s “pal” Mr. Mxyzptlk debuted in 1944. By the 1960s, everyone was jumping on the bandwagon: the Flash had Mopee, Martian Manhunter had Zook, and Batman had Bat-Mite.

All of these characters are the embodiment of “stop helping me!” No matter how hard they try, they are doomed to screw up at the hero’s expense. So get used to cleaning up supernatural messes as you fend off the usual super-threats.

In a slightly different vein, Wonder Woman’s younger self, Wonder Tot, was friends with a genie creatively named Mister Genie. However, Wondy was the one always rescuing him and/or getting him into trouble rather than vice versa.

Over at Marvel, our heroes usually had to contend with the Unattainable Love Interest: a woman they loved very much but could not under any circumstances allow themselves to be with. DC’s heroes had very different problems.

For heroes like Superman, the woman in question would have married them in a heartbeat, but the hero wasn’t ready to commit. (And, given how, uh, determined these women could be, I can’t say I blame them.)

Then there are heroes who are already partnered with their dream girl. Aquaman, for instance, quickly married his beloved (non-reporter) girlfriend Mera, while the Flash was going steady with Iris West…though perhaps he shouldn’t have, given what a dismissive, abusive tyrant Iris could be.

Another thing these love interests have in common is that most of them are reporters. And those reporters are all determined to worm the secret identities out of their superheroic crushes. Superman’s girlfriend Lois Lane was the trendsetter, of course. By the early ’60s, she’d been joined by Vicki Vale (Batman), Iris West (the Flash), and Sue Williams (Green Lantern). Sue is an especially interesting case. While she fell in love with a man who she suspected of being a hero, she was the only one of the Plucky Reporter Girlfriends whose instincts failed her: she erroneously set her sights on the real Green Lantern’s brother, Jim. Much like the others, however, she was willing to go to absurd lengths to prove she was right.

The most important thing about the Plucky Reporter Girlfriend is that she be smart enough to do her job, but gullible enough not to be able to prove her hunch regarding the hero’s identity. It’s a tough but essential balance.

Violence, while not entirely verboten in the early ’60s, was much more sanitized than in previous decades. To replace lengthy fight scenes and gruesome gun battles, superheroes found themselves menaced by gadgets that had all sorts of fantastical capabilities. You will probably end up facing all manner of strange weapons: devolution rays, youth rays, aging rays…um, fat rays…look, I said you have to be inoffensive by ’60s standards, not modern ones.

My absolute favorite nonsense ray is probably the Flash getting turned into a marionette.

You can’t help but admire a comic this devoted to being ridiculous.

And don’t think that being as invulnerable as Superman lets you off the hook: he frequently had to contend with Red Kryptonite, an extremely specific mineral that could do literally anything to Superman (or any other Kryptonian) for a day or two, after which that particular hunk of Red K would never affect them again. We got to see members of the Super family split into their own twin, turn evil, grow the head of an ant, gain hypnotic powers, and become a living mood ring, all thanks to Red Kryptonite.

I put this same entry in the Marvel starter kit, but it’s equally relevant here. There are some key differences, however. While Marvel’s heroes tangled with specific communist countries and even the occasional caricature of Nikita Khrushchev, remember: as a DC hero, innocuousness is the name of the game. This means sticking to unnamed, generic “enemy nations” with unnamed, generic evil intentions.

To see how it’s done, check out this issue of Teen Titans, in which they battle an evil organization that probably has communist affiliations without ever mentioning communism once.

Or look at Flash #121, where our hero must confront “foreign agents.” What country are they from? Not our concern!

For an especially fun example, check out Green Lantern #14, where the resident of a small (fictional) Eastern European nation has it out for both the U.S. and Russia. Not due to their destructive foreign policies, mind — he just hates that they hog all the headlines.

At DC, the key to survival is never taking a strong position on anything.

Being a ’60s DC hero isn’t always very much fun. You have to somehow be both incredibly bland while twisting yourself into a pretzel to please both your audience and their moral guardians. Otherwise, you don’t stand a chance of surviving to the end of the decade, and that’s the goal here: survival.

DC heroes of this era had to make considerable sacrifices to stay above water. Most of them seem to involve aping Superman rather than doing anything original. But at the end of the day, they succeeded, getting through the bad times and living long enough to have a real opinion once again.