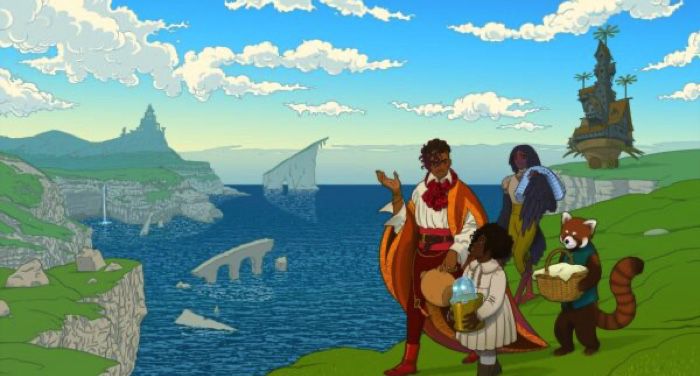 In the last two years I’ve seen more people talking about playing role-playing games (RPGs) than perhaps ever before — people within and outside of my personal gaming sphere are getting together to play tabletop RPGs, like Dungeons & Dragons, over Zoom and Google Meetings. Beyond that, people are taking up interest in the tarot and in making things with their hands, including embroidery, fine art, and letter-writing. In thinking about all of the ways to play RPGs, and all of the forms those take, I found many exciting options, and wanted to share the best tabletop roleplaying games and accessories that (mostly) aren’t D&D.

I had an unusual introduction to RPGs. Unlike many of my peers, I didn’t start with Dungeons & Dragons. I knew people who played, but I was not invited. Technically, I suppose my introduction to roleplaying in general was via the SCA (Society for Creative Anachronism), a group devoted to reenacting aspects of the middle ages while insisting they are not a LARP (live action role play), which they absolutely are.

My first tabletop RPG was Pinnacle’s Deadlands, a weird west game that I started playing in 1998. The original system was complicated and clunky (it’s been updated since), and the game world had several elements that were racist or sexist in their attempt to not be racist or sexist, but we simply ignored those elements and made the game our own with home-brew add-ons and rule modifications. Since then we’ve played many other games in many gaming systems, and always made our own modifications to personalize the experience for ourselves and more recently our kids.

Shing Yin Khor is a comics and installation artist and the creator of several keepsake games, which are games in which you create a finished object you can keep. This one has you set out on a journey to visit a friend, embroidering and/or drawing your path onto a pre-made map and drawing cards to determine what happens along the way.

Shing Yin Khor is also the author of the graphic novels The American Dream?, about traveling Route 66 across America, and The Legend of Auntie Po, historical fiction set in the Sierra Nevadas; they also designed my favorite T-shirt. Their next game will be Remember August, a letter-writing keepsake game.

Creator Marie Enger describes Casket Land as “a bleak occult western role-playing game with a focus on making difficult decisions as a group.” The basic rules are free, but the physical edition is well worthwhile.

Marie Enger also writes and draws comics and has the best URL I’ve ever seen.

This game describes itself as inspired by Studio Ghibli, and especially Howl’s Moving Castle. NEED I SAY MORE? Okay, how about this? It’s queer and focused on found family. This is a group game for four or more players and does not designate a game master (GM), but uses cooperation to accomplish the group’s goals.

Coming soon to Kickstarter is this promising GM-less, diceless, cooperative game from authors C.S.E. Cooney (Desdemona and the Deep) and Carlos Hernandez (Sal and Gabi Break the Universe).

A Light in the Mist

This game is technically not available yet, but it Kickstarted successfully and I had to tell you about it. This game comes in the form of a functional tarot deck that…here, I’ll let the creators explain: “When your friend’s mysterious disappearance results in the discovery of an unusual item, you suddenly find yourself embarking on a journey through time. Experience a character-driven story told through the memories of a missing friend, using an object that serves as a tarot deck, a puzzle game, and a work of art. Packed with a variety of puzzles and choose-your-own-path style non-linear gameplay, The Light in the Mist can be played solo or cooperatively in a small group.”

This project just completed its Kickstarter, so hopefully there will be more information soon! From their description: “All you’ve ever known is the Great River. Storms break on the river banks, and treasure is buried in the silt. Fish swim in abundance through the Silver Pits, and rice grows thick and luscious on the Glas Road. No one has ever found the Source of the River, from which it is said that all magic springs. No one has ever returned after crossing the horizon of the Sea. If you travel upriver to the Source, you’ll be seen as a fool hunting for faerie gold. If you travel downriver, you’ll be seen as already lost, drowned in the ravenous Sea. But you and your crew have sworn a magical Oath, and you must reach your destination – or forfeit your souls and your ship to the water.” This is a four- to 12-session game using tarot cards.

To play this game, you use your own tarot deck, which is a lovely thing for folks who have a favorite deck already and an opportunity for folks who are looking to get into tarot. There are several ways to play laid out in the guidebook. More information at the game’s website.

If you do play D&D and are looking for a more streamlined but still analog approach to keeping track of your campaigns, the Field Notes character and dungeon master journals are perfect. They come pre-loaded with character sheets, charts, and tables, so players can keep track of things like gear and DMs can keep track of all those pesky NPCs.

Not into D&D, or have more specific needs? This game-neutral notebook has optional expansions to add D&D or Pathfinder character sheets, GM-specific pages, and other customizations. Several other cover images are available, including a wyvern, kraken, runes, and more!

If you prefer a fully analog experience, you’re probably wondering where all of your No. 2 pencils disappeared to. These are funny and fitting!

Looking for more RPG items? Check out this older list of gaming accessories. Or maybe you’d like to know about role-playing games based on books, or explore fantastic worlds that would make great RPG settings.