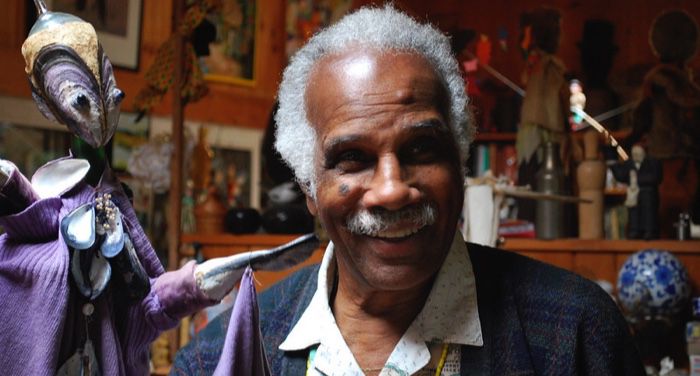 This post illustrating the wonderful life of Ashley Bryan was originally published in our Kid Lit newsletter, The Kids Are All Right . Sign up for it here to get the latest in children’s book releases, reviews, deals, and more!

Like many members of the kid lit community, I was deeply saddened to hear of the death of children’s book legend Ashley Bryan last weekend. I’ve had the pleasure to meet him multiple times, twice at his beautiful home on Islesford, a small island off the coast of Maine. His studio, located in a sunlit corner of his home, has jars brimming with sea glass he has collected from long walks on the beach and jars filled with newspaper that he mashes up into a paste for his gorgeous sculptures and puppets.

When Ashley was eighteen, he was drafted to fight in World War II. As a Black soldier in a segregated army, Ashley spent the next three years witnessing the atrocities of war. He experienced harsh and inhumane treatment at the hands of his officers and was given the cruelest tasks, such as burying the bodies of fallen soldiers. Throughout it all, he drew and made notes in his sketchbook and dreamed of returning home.

When he came back to America in January of 1946, he planned to return to his college studies in art at Cooper Union. Haunted by the images of war, he instead enrolled at Columbia University and studied philosophy. He tucked his war drawings away in a drawer, speaking of that time in his life only to his family and close friends. He traveled the world and later settled down in Islesford, Maine. For decades, Ashley, pulling a wagon filled with his paint supplies, became a familiar fixture on the island. He painted big murals filled with bold flowers and took long walks on the beach where he collected sea glass polished smooth by the waves that would later be used for his stained glass windows. Some of those windows were installed at The Storyteller Pavilion, a project of The Ashley Bryan Center, which is down the road from his home.

He created and illustrated dozens of books over his lifetime, each one beautiful and special. Ashley’s autobiography is stunning, filled with never-before-seen artwork and handwritten letters and diary entries from his time serving in World War II. It is one of the most powerful and honest and illuminating autobiographies I have ever read, and I encourage you all to pick up a copy and spend time in his story. This is probably one of my favorite books because it captures the essence of this remarkable man. From his walks on the beach by his home on Little Cranberry Island, Ashley would gather weathered bones and stones shaped like hearts and empty bottles and fishing net. He would bring them back to his home and make the most magnificent puppets out of them, some nearly two feet tall. In the book, he gives them names and stories. Freedom Over Me: Eleven Slaves, Their Lives and Dreams Brought to Life by Ashley Bryan

This luminous book, which won a Newbery Honor and Coretta Scott King Illustrator Honor Award, has its roots in original slave auction and plantation estate documents. Ashley Bryan contrasts the monetary value of each person and imagines and interprets each person’s life on the plantation, as well as the life their owner knew nothing about—their dreams and pride in knowing that they were worth far more than an overseer or madam ever would guess.

The last time I saw Ashley was the summer of 2019. He had just been visited by a team from the Kislak Center for Special Collections at the University of Pennsylvania where they spent a week photographing an archive of his work, which includes drawings he made as a child, letters and correspondence to friends, and preliminary and finished material from a number of books. Ashley offered me a seat at his dining room table, pushed over a bin of gumdrops in my direction, and showed me a mosaic that our friend Linda Sue Park had made for him – it is a peacock made of gumdrops.

I will never forget this incredible man. He is truly a national treasure.

Rest in peace, Ashley Bryan. Thank you for your big, beautiful life.