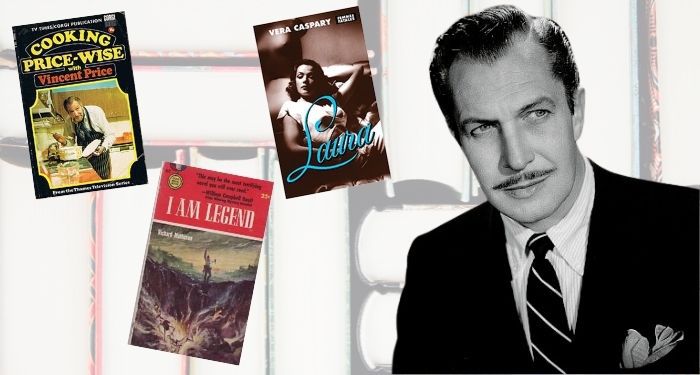 Vincent Price was an art collector, world traveler, a foodie, and an adventurous home cook. He wrote books, he was a reader, and he was a bisexual icon before we really had many of those (although his bisexuality was not confirmed until 2015). He was also a wildly famous actor with a career spanning nearly 60 years; you’ve probably seen at least one of his many movies.

Vincent Leonard Price Jr. was born May 27, 1911, in St. Louis, Missouri. His family had come over on the Mayflower and his ancestor was the first white person born in colonial Massachusetts, which is particularly interesting given the arc of Price’s personal politics (more on that later). His grandfather had established their fortune when he invented the first baking powder with a cream of tartar base, and his father was president of the National Candy Company, both of which tie into Price’s love of good food, whether or not they were a direct influence. Price’s childhood was one of extreme privilege and he was fortunate enough to be encouraged in his love of the arts.

As a child, Price showed less musical talent than his older siblings, but enjoyed acting in their school plays (and later his own) and was smitten with motion pictures. He discovered fine art in a book belonging to his oldest sister, which led to his first purchase toward his eventually significant collection: a sketch titled “Two Nude Models, One Standing” by Rembrandt, bought at age 11 for $37.50, which he paid off over a year. Price was educated in St. Louis and later earned an undergraduate degree in English with a minor in art history from Yale. He then moved to London in pursuit of a Master’s in fine art, but was bitten, as they say, by the acting bug.

In 1935 Price made his Broadway debut in Victoria Regina as Prince Albert, opposite Helen Hayes as Queen Victoria. The play was written by Laurence Housman, an English playwright, author, and illustrator and the brother of poet A.E. Housman, and had opened in London earlier that year (I’ve found conflicting information about whether Price appeared in any of the London productions). Moving to film, he played character roles in several genres for a few years, making such films as The Tower of London, a historical about Richard III starring Basil Rathbone and Boris Karloff, and The Invisible Man Returns, a sequel to the Claude Rains–starring film based on the H.G. Wells novel. He also made several biographical pictures, including Brigham Young, in which he played Joseph Smith; The Song of Bernadette, based on a novel about the saint; and Wilson, about the 28th president, in which he played attorney and cabinet member William Gibbs McAdoo.

According to Victoria Price, his daughter and biographer, Price was easily influenced by his social circles, voting Republican like his parents and easily influenced by his upper class friends; as a result he was taken in by Hitler’s early ideas, enchanted by the idea that white history is important, but was eventually set straight after he began socializing with theatre, art, and literary luminaries (many of them Jewish) such as Dorothy Parker and Lillian Hellman. His friends in the late 1930s were mostly Socialists and he became a Roosevelt supporter and ultimately antifascist and a Democrat. However, it is important not to gloss over his antisemitism, inadvertent though it may have been. In the 1950s, Price was investigated by HUAC and graylisted for his early communist-leaning politics, though that did not last.

In Price’s acting career, he found many bookish roles to inhabit. In 1944 he played supporting roles in The Keys of the Kingdom, directed by John M. Stahl and based on the A.J. Cronin novel, and in the Otto Preminger–directed, Gene Tierney–starring film Laura, based on the novel by Vera Caspary. He followed up with another role opposite Tierney in Dragonwyck, based on the novel by Anya Seton. He became known for horror films in the 1950s, a reputation he would keep for his entire life and beyond. His bookish horror roles include The Fly, based on a short story also titled “The Fly” by George Langelaan; The Last Man on Earth based on I Am Legend by Richard Matheson; Witchfinder General based on the novel by Ronald Bassett; and the entire Corman-Poe Cycle.

He continued to collect art, and wrote books about it. President Eisenhower asked him to serve on the Indian Arts and Crafts board, fulfilling a lifelong love of Native American art — as a child he collected arrowheads in St. Louis and discovered buried pottery at camp in Colorado. (The presidential request surprised Price, who was by then a Democrat.) He established the Vincent Price Art Museum at East Los Angeles College, a community college to which he and his second wife Mary donated over 2,000 pieces of art; the museum collection is valued at over $5 million as of 1992 (presumably more now). He curated a line of fine art reproductions for Sears, fulfilling his goal to bring fine art to people at all price points. And he published The Vincent Price Treasury of American Art in 1972, as well as his own autobiography, I Like What I Know – A Visual Autobiography. He also wrote two unfinished, unpublished memoirs, which his daughter references in her biography of him.

Price’s bookish roles continued. He made dramatic recordings of Edgar Allan Poe stories in the 1970s, and voice acted in cartoons including The Great Mouse Detective (based, of course, on Sherlock Holmes). He starred in the single season cartoon The 13 Ghosts of Scooby-Doo as Vincent Van Ghoul, which is not technically based on books but there are comics so I am counting it. He hosted the PBS anthology Mystery!, starred with Bette Davis and Lillian Gish in 1987’s The Whales of August, adapted from the play, and was in two episodes of Shelley DuVall’s Faerie Tale Theatre — as the mirror in “Snow White and the Seven Dwarfs” and the narrator in “The Boy Who Left Home to Find Out About the Shivers.” His final role was in Edward Scissorhands, an original that has since been adapted to comics and more.

Other than art and his family, Price’s greatest love was cooking. He hosted his own show, Cooking Price-Wise, in 1971, but he had already written several cookbooks by then with his second wife Mary. He went on to write two more. Three books are currently available in reissue: A Treasury of Great Recipes, Mary and Vincent Price’s Come into the Kitchen Cook Book, and Cooking Price-Wise.