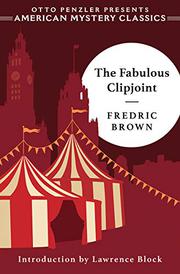 
Chicago apprentice printer Ed Hunter suspects the worst as soon as he realizes that his father, Wallace, a linotype setter at Elwood Press, hasn’t come home all night. Sure enough, Wally’s been robbed and beaten to death in a nearby alley. Overriding his stepmother Madge’s dislike of Ambrose Hunter, the uncle he hasn’t seen for 10 years, Ed takes a train to Janesville, where the traveling carnival Am works at has come, and breaks the news about his dead brother. Am immediately announces that they’re not going to leave the investigation up to Detective Bassett, of Chicago Homicide, because even though Bassett’s already reconstructed Wally’s movements from bar to bar the night he died, the clues won’t take him any further; and although they lack Bassett’s official resources, “we’re the Hunters.” Returning to the Windy City, Ed and Am begin poking around in Wally’s private life in the hope of uncovering a motive beyond simple robbery. Along the way, Ed realizes that he’s getting to know Wally better and feel closer to him than he ever did while his father was alive. Brown expertly evokes a tawdry big-city atmosphere, persuasively roots Ed’s ideas about where to look next in his natural grieving process, doles out come-ons from gangster’s moll Claire Raymond and Gardie Hunter, Ed’s 14-year-old stepsister, and introduces a decisive turn in the case with the discovery that Wally had taken out a $5,000 life insurance policy, giving Madge a powerful motive for murder and indicating that he may have been keeping even more secrets.