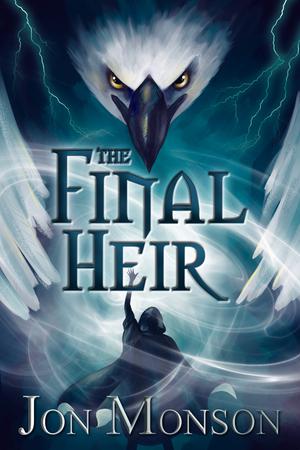 
On Einar, life is fueled by the draod, or Power of Creation—an energy that permeates all existence. Mages who wear qilada, priceless relics of the First Heirs, can pull strands from this energy to weave spells of Destruction, Restoration, and Illusion. Though the secrets of making qilada have been lost, Einar is still ruled by seven Heirs whose powers are inherited after death by worthy successors. But a ruthless challenger has arisen: Mahzun, “the Usurper, the Wild Man, the Primal King, the Destroyer of Worlds.” He possesses a deadly magical weapon, the Eternal Blade, which he pulls from the draod at will. Wielding it comes at a price—torturous pain and injuries that have left Mahzun a scarred, grotesque figure of horror—but the Blade has the unique ability of allowing him to slay the Heirs and prevent their powers from being passed on. Six Heirs are dead; only Lord Dimitri remains, protected in a mountain fastness. Training in his service are two teenage friends: Zahara, a dark-skinned aristocrat and a highly talented mage, and Ekarath, a blond, blue-eyed, fair-skinned soldier who hopes to join Dimitri’s personal bodyguards. Knowing Mahzun is on the brink of victory, Dimitri gives Zahara and Ekarath the task of bringing a book of knowledge to Farban, an older hermit. They succeed, but Mahzun murders Dimitri, wins the war, and settles in to rule. Dimitri did manage to pass his powers on—not to Zahara but to Ekarath, who’s never cast a spell in his life. Though young and unprepared, the friends hold the only key to challenging Mahzun.

In his fifth YA fantasy novel, Monson offers one or two elements that have a familiar air. The draod is very much like the Force, and Farban recalls Obi-Wan Kenobi. But such resemblances are few, much outweighed by original and well-thought-out worldbuilding. For example, spellcasting is given more palpable reality through fabric-related metaphors such as strands, weaving, and knots. Battle scenes are crisp and exciting, and the plot ties in well with character development, as when Ekarath—a mere soldier, not an elite mage—struggles with imposter syndrome after he gains his new powers. But the real star of this show is Mahzun. Something like Satan in Milton’s Paradise Lost, he’s far and away the most compelling personality in this series opener. He sees himself as a liberator, not a tyrant—a “Savior of Man” who will free all Einar from its autocratic ruling class, a goal with democratic resonance. Several other elements give Mahzun added dimension, such as his soul bond with Aiya, his telepathic griffin mount; the relationship with his sister; and his torment by the silent ghosts of those the Blade has killed, visible only to him.