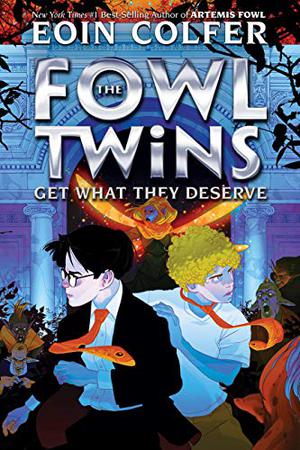 THE FOWL TWINS GET WHAT THEY DESERVE | Kirkus Reviews


From the Captain Underpants series

Sure signs that the creative wells are running dry at last, the Captain’s ninth, overstuffed outing both recycles a villain (see Book 4) and offers trendy anti-bullying wish fulfillment.

Not that there aren’t pranks and envelope-pushing quips aplenty. To start, in an alternate ending to the previous episode, Principal Krupp ends up in prison (“…a lot like being a student at Jerome Horwitz Elementary School, except that the prison had better funding”). There, he witnesses fellow inmate Tippy Tinkletrousers (aka Professor Poopypants) escape in a giant Robo-Suit (later reduced to time-traveling trousers). The villain sets off after George and Harold, who are in juvie (“not much different from our old school…except that they have library books here.”). Cut to five years previous, in a prequel to the whole series. George and Harold link up in kindergarten to reduce a quartet of vicious bullies to giggling insanity with a relentless series of pranks involving shaving cream, spiders, effeminate spoof text messages and friendship bracelets. Pilkey tucks both topical jokes and bathroom humor into the cartoon art, and ups the narrative’s lexical ante with terms like “pharmaceuticals” and “theatrical flair.” Unfortunately, the bullies’ sad fates force Krupp to resign, so he’s not around to save the Earth from being destroyed later on by Talking Toilets and other invaders…

Is this the end? Well, no…the series will stagger on through at least one more scheduled sequel.