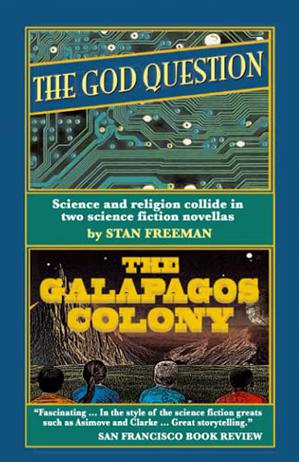 THE GOD QUESTION AND THE GALAPAGOS COLONY | Kirkus Reviews


In The God Question, scientists have at last succeeded in creating a self-aware “class one” computer with a superhuman intellect so powerful that it’s been outlawed. But 49-year-old computer scientist Stephen Kendrick gets hold of the system’s untraceable source code, converts a class two supercomputer to a class one, and decides to ask it the titular “God question”—whether there’s any evidence for God’s existence. However, the operating system repeatedly shuts itself down and erases all traces of itself, determined not to answer. In the end, the bigger question is why Stephen is asking a machine about faith. The Galapagos Colony, set in 2474, concerns the planet Arcadia, which has been isolated for more than two centuries after an unknown disease killed all the adults, leaving children with simplified technology and knowledge. Twenty-eight-year-old Matias Silva is sent to investigate, and he’s stunned by Arcadia’s beauty but doesn’t understand its peoples’ spiritual philosophy of being guided by a moment of intuition, or a “true point.” He dismisses their beliefs and makes a choice that forever changes the planet in ways he must painfully grapple with later. In his first SF book, Freeman capitalizes on the freedom afforded by speculative fiction to thoughtfully consider philosophical and ethical conundrums. The skillfully written stories gain strength from their multilayered characterization. Both Stephen and Matias must confront what they’re really looking for in the choices they’ve made; in both cases, their questions offer them—and readers—richer food for thought than their answers. Freeman’s monochrome illustrations are reminiscent of steel engravings, and the old-fashioned technique provides an intriguing contrast to the advanced futures described in the tales.