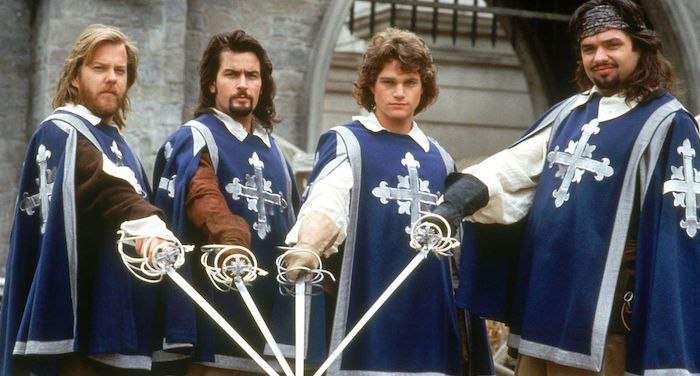 The Many Adaptations of Alexandre Dumas’s THE THREE MUSKETEERS

The Three Musketeers by Alexandre Dumas is my favorite story. It isn’t my favorite book, although I have read it a few times and greatly enjoy it; no, it’s my favorite story. My favorite way to ingest it is on screen. And it’s been adapted a lot, starting with a stage adaptation written by Dumas, so I focused only on notable film and television adaptations — and I’ve still left out many adaptations!

Before we get started, it may be helpful to know that The Three Musketeers, published in 1844, is the first of three novels by Dumas that make up the D’Artagnan Romances; it was followed in 1845 by Twenty Years After, which takes place, er, 20 years after The Three Musketeers, and in 1847 by The Vicomte of Bragelonne: Ten Years Later, which includes a section known as “The Man in the Iron Mask” — more on that later. (Publication years are estimates, as all three novels were serialized prior to being released in single volumes.)

I started writing this intending to compare the adaptations and maybe even use a ratings system based on factors like accuracy to the novel(s), etc., but it turns out I love all my children equally.

Film Adaptations of The Three Musketeers

The first known film adaptation was a now-lost French production in 1903, about which, sadly, almost no information remains (at least, not that I could find). There were at least seven other silent film adaptations, the most famous of which starred Douglas Fairbanks in 1921. A French silent version from the same year was remade as a talkie in 1932 by the same director (Henri Diamant-Berger) and with mostly the same cast. The Fairbanks film had a 1929 sequel The Iron Mask, based on “The Man in the Iron Mask,” which also starred Fairbanks and was part-talkie, part-silent.

There were many notable early sound versions. A 1933 serial starred John Wayne and replaced the Musketeers with French Foreign Legionnaires. A 1939 comedy starred Don Ameche and the Ritz Brothers. The first Mexican version came out in 1942 and starred Cantinflas, who was the most famous Mexican comedian of the time. Republic Pictures made 51 westerns known as The Three Mesquiteers, loosely based on the Dumas, between 1936 and 1943. The 1948 Gene Kelly version, likely the most famous version for several decades, co-starred Angela Lansbury, June Allyson, Lana Turner, Van Heflin, Frank Morgan, and Vincent Price; it also famously had a scene recreated as the fictional silent film The Royal Rascal in Singing in the Rain.

Then came my personal favorite: the 1973 The Three Musketeers and 1974 The Four Musketeers. This duo (shot as a single movie and released as two, which led to massive contract lawsuits!) starred Michael York, Oliver Reed, Frank Finlay, and Richard Chamberlain — not to mention Faye Dunaway, Raquel Welch, Christopher Lee, and Charlton Heston…and also Jean-Pierre Cassel, Geraldine Chaplin, Simon Ward, Sybil Danning, Spike Milligan, SHALL I GO ON? Oh, and it was written and directed by Richard Lester, best known for making movies with The Beatles (for whom he originally conceived the adaptation — yes, really). I could write a whole book about how fantastic these movies are, how they are absurd in just the right way, over the top without being cheesy (except, again, in the right way), faithful to the book without being too rigid…and furthermore, the sword fights are choreographed by the great Bill Hobbs. Just trust me, okay?

For the majority of Millennials and a decent chunk of Gen X, the 1993 Disney version is the definitive Musketeer movie. Starring Chris O’Donnell, Charlie Sheen, Oliver Platt, and Kiefer Sutherland, the movie also featured Rebecca De Mornay, Tim Curry, Michael Wincott, and Julie Delpy; a watered-down version of the integral intrigue of the story (in this version the king and queen are young and in love); and an utterly mystifying backstory of Porthos as a pirate that has since become “canon” in the same way that Robin Hood having a Moor sidekick has post–Prince of Thieves. Oh, the ’90s.

After that, there were several cartoons. These included the truly dreadful 2004 Mickey, Donald, Goofy: The Three Musketeers, a straight-to-video sequel that my children watched approximately one million times. In 2009, Barbie and the Musketeers was released, also straight-to-video (please note these were both before streaming was really a thing); I’ve never seen it, but assume it is exactly what it sounds like. Of course, these were not the first cartoon versions — there was a 1936 Italian feature; a Silly Symphony the same year called “Three Blind Mouseketeers”; and a 1952 Tom and Jerry cartoon called “The Two Mouseketeers,” among (many) others.

More recently, we have the 2011 steampunk-ish movie starring Milla Jovovich, Luke Evans, Orlando Bloom, Ray Stevenson, Matthew Macfadyen, Mads Mikkelsen, Christoph Waltz, and a bunch of other people. This version changed the story even more than the ’93 (Milady used to…be a musketeer? Kind of??) and added fun things like airships.

Television Adaptations of The Three Musketeers

Young Blades was a historical fantasy series that ran for 13 episodes on PAX TV in 2005 and was a loose sequel to/adaptation of The Three Musketeers. The cast was largely Canadian, including Michael Ironside; Queen Anne was played by Sheena Easton. I haven’t seen this, and I won’t lie — it looks terrible. I love it.

The 2014–2016 BBC series The Musketeers starred Luke Pasquinalo, Tom Burke, Santiago Cabrera, Howard Charles, Peter Capaldi, Hugo Spear, and a huge cast of extremely good looking people in a set-up that resembled the original and immediately went all the way off the rails, doing its own thing and having so much fun with it that one cannot possibly be very mad about it. I have seen this one, and it is bananapants.

There was a Korean television adaptation the same year, about which I know absolutely nothing except this description: “Set in 17th century Joseon Dynasty, the story follows the Crown Prince and his three guards as they embark on an unforgettable journey.” I had to mention it despite my lack of information, because LOOK AT THIS TRAILER AND GIVE ME THIS SHOW.

Adaptations of Sequels to The Three Musketeers

The Return of the Musketeers is a 1989 adaptation of Twenty Years After, directed by Richard Lester and starring the cast of his 1973 The Three Musketeers, with the additions of C. Thomas Howell as Athos’s son Raoul and Kim Catrall as Justine de Winter. While not good, this is a fun movie that was unfortunately marred by productions problems including underfunding, the producers of the first two movies refusing to allow Lester to use footage for flashbacks, and the on-set death of actor Roy Kinnear.

The 2009 Russian film The Return of the Musketeer (not to be confused with the above) is a musical sequel to the 1978 adaptation of The Three Musketeers that begins at the end of The Vicomte of Bragelonne and follows D’Artagnan after the deaths of the other Musketeers.

The Vicomte of Bragelonne has mostly been adapted as The Man in the Iron Mask. Notable versions include a 1939 film by director James Whale (Frankenstein) starring Louis Hayward and featuring Peter Cushing’s film debut in a small roll; in 1977 by the BBC and starring Richard Chamberlain; and in 1998 by Randall Wallace and starring Jeremy Irons, John Malkovich, Gérard Depardieu, Gabriel Byrne, and Leonardo DiCaprio.

Revenge of the Musketeers (La fille de d’Artagnan, or D’Artagnan’s Daughter, in French) is a 1994 period adventure film about…D’Artagnan’s daughter bringing together the original Musketeers to foil a plot against the king.

Altogether, there have been over 50 film and television adaptations of The Three Musketeers — or, more accurately, of the D’Artagnan Romances. Every single one is perfect.