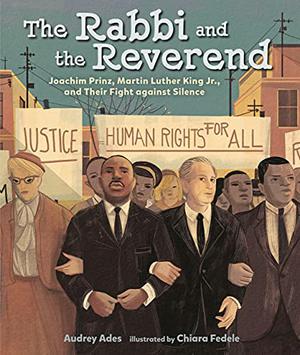 THE RABBI AND THE REVEREND | Kirkus Reviews


Joachim Prinz was born in 1902 in Germany, and he became the country’s youngest rabbi in 1926. When Adolf Hitler came to power, Prinz spoke up against antisemitism and was arrested several times before finally leaving Germany for the United States in 1937—where he was dismayed to find Black people being deprived of equal rights, as Jews had been in Germany. Meanwhile, Martin Luther King Jr. experienced segregation as a boy in the 1930s. When he became a leader of the civil rights movement, the two leaders met, supported each other, and fought together. The juxtaposition of these two leaders’ paths and the explanation of what their causes, beliefs, and communities had in common is, in Ades’ hands, a well-woven historical tale that is worth sharing and spreading. The culmination of the story in 1963 at the March on Washington for Jobs and Freedom allows young readers to see both that King was not the only speaker at that famous event and that those by his side had also worked for years. The illustrations focus largely on the main figures but also offer scenes of daily life in Germany and the United States. Scenes of protest are styled, scrapbooklike, as black-and-white faux photos against monochromatic backgrounds. Details from each leader’s childhood add depth to their stories, and the focus on silence as the enemy points to readers’ responsibility to speak up against injustice.