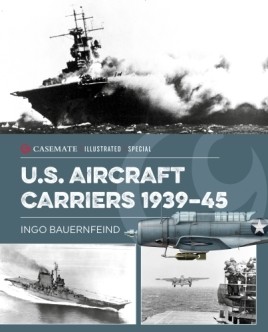 I thought this would be the perfect book to review on DECEMBER 7. If you do not know the significance of December 7, 1941, first you should be ashamed of yourself. PEARL HARBOR DAY!

This book is a fantastic account of not only the Aircraft Carriers of World War 2 but also of the war in the Pacific. 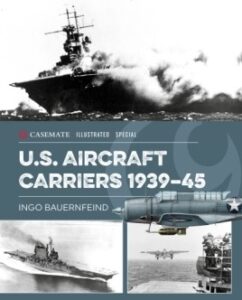 From the first Idea and creation of this new kind of ship. The way it changed naval warfare. U.S. Aircraft Carriers 1939–45 is a book every U.S. history buff is going to want.

On top of the history of the ships the book takes you through the major battles of the war. Because no American Carriers were Damaged in the attack on Pearl Harbor, they were able to strike back at Japan that much sooner.

The book covers the Dolittle Raid, Japan’s devastating defeat at Midway. it goes on from there.

There is much more to the book then a history of the war. It is truly about the ships. What they were used for and where deployed. There is a paragraph for many of the Aircraft carriers describing when they were commissioned. The battles they participated in and when they were retired. I thoroughly enjoyed this part of the book.

The US Navy started WW2 with 7 aircraft carriers. Another roughly 160 aircraft carriers were built during the war many of these were smaller light carriers and escort carriers whose job was just that, Escort convoys. 24 Essex-class fleet carriers capable of carrying 90 to 110 aircraft. In contrast at the end of the war Japan had 3

This extensively illustrated volume tells the dramatic yet successful story of US aircraft carriers in World War II by class, ranging from early pre-war designs to escort carriers built from destroyer hulls to the gigantic fleet carriers serving as the predecessors of modern-day super carriers.

Besides covering the famous great carrier battles in the Pacific, this book also tells of the equally important actions of US flat tops hunting and destroying German U-boats in the Atlantic, making an enormous contribution to the elimination of the U-boat dangers and the safe arrival of transatlantic supplies, so desperately needed for the launch of D-Day.

Including profiles and explanatory text boxes, the concise text gives a clear overview of each ship’s career, its fate and its significance in American naval history. Moreover, the reader learns about the technical evolution of US carriers throughout the war, and the various aircraft launched from these magnificent vessels to engage their Japanese or German foes. This volume provides an overview of preserved World War II flat tops serving as floating museums for future generations as well as a dive to the sunken USS Saratoga at Bikini Atoll.