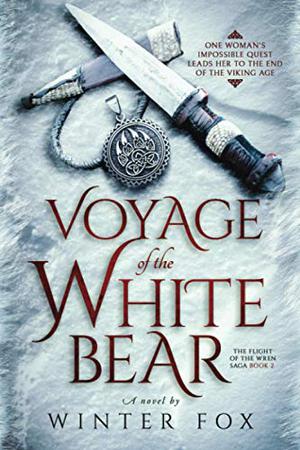 
Book 2 of Fox’s sweeping fictional epic, in which an assortment of personal quests gradually becomes woven together, opens in 1008 in Tønsberg, Norway, during an era of transition in the Scandinavian countries. Christianity is threatening to replace the beliefs and gods of the North. Olav Haraldsson, 13, one year short of adulthood, breaks loose from his training as a Viking warrior and heads off on his first spree of pillaging and plundering. He and his coterie of followers steal an old sailing vessel belonging to Lord Sigurd Syr, his benefactor and his mother’s fiance. When Lady Asta Gudbrandtsdotter learns of her son’s exploits, she consults Hekka, the Witch of Vestfold, whose magic she calls on to protect Olav. Meanwhile, Hilja of Kokolu, a young Healer from a tiny, ransacked village on the northern coast of Lapland, currently living with Hekka, decides to journey to the frigid terrain of the colonies in Greenland. Hilja hopes to find her mother and sister, kidnapped and sold into slavery many years ago by Norsemen. Able to communicate with the natural world, Hilja communes with a gull she calls Skeet. She sees what he sees, reads the winds, and observes the faces of people in far-off settlements as she searches for her family. Accompanying her as her protector is the formidable Laplander Agatha Rothskilde, trained as a warrior but prevented by her gender from fulfilling her dream. The development of friendship and mutual respect between the diminutive Hilja and the “Giantess” Agatha, so different in personality and upbringing, presents the most enjoyable, humorous episodes of this complex tale that includes voluminous plot threads. Fox provides enough grisly battle scenes to engage armchair adventurers and enough historical factoids about period lifestyles and political intrigue to satisfy those interested in Norse culture. In between are vivid ecological descriptions, romance, jealousy, and vengeance. Fortunately, the author supplies a cast of characters to help readers wade through the plethora of names and relationships.