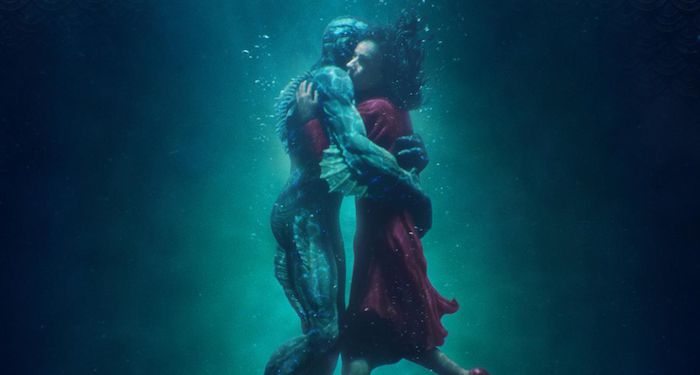 What’s the Appeal of Monster Romance? A Brief History of Sexy Monsters

Think back to March 4, 2018. Millions of people were watching the 90th Academy Awards. Guillermo Del Toro won Best Director for his film The Shape of Water, which also won Best Picture. Were you one of people who thought, “the fish-sex movie??” or one of the people who, to quote Lindsay Ellis, thought it was great that “a mainstream movie finally went where scores of women had wanted it go for decades”?

You might not think the movie is good (Voltaire supports your right to be wrong), but it’s undeniable that the performance of Doug Jones as a romantic lead as a fish man was a shock to some. As Kayleigh Donaldson described it, “That whole part about the inter-species sex scene has raised more than a few eyebrows since the film first screened…Some critics have been unnerved by the story, but there are also plenty of women who are incredibly excited to see this romance play out.” Donaldson also did the hard work of explaining to the Internet why people found Venom sexy in the 2018 film, and the undeniable sex appeal of King Shark.

Although there are some connections between the world of enemies-to-lovers romance and compelling villain stories to loving the monster, sexy monsters have an interesting history in Hollywood films, as well as pulp book and magazine covers. Monster romances are more than just falling for the “bad guy” — it’s finding connection with a creature deemed ugly, immoral, and unfit for society.

The 18th century French story that inspired the Disney cartoon version of Beauty and the Beast is not the only story about a woman who falls for a monster. Maria Tatar’s book Beauty and the Beast: Classic Tales About Animal Brides and Grooms from Around the World collects various fairytales and folklore from more than 20 countries.

When the archetypal beauty is able to soften the hard heart of the beast, she is rewarded with love and affection. However, there are also stories where the beastly husband’s abuse of power pushes the princess to escape and leave her life behind.

In Kelly Faircloth’s piece about the origins of La Belle et La Bête that eventually made its way to Disney, she notes that the original tale had a specific aim for the women who were the intended audience: “It was first written by Gabrielle-Suzanne Barbot de Villeneuve and published in 1740 as part of her book The Young American Girl and the Sea Tales. Detailed and literary and full of decorative flourishes, it’s nevertheless the classic example of what psychologist Bruno Bettelheim identified as an animal groom story, suggesting these narratives are meant to reassure nervous virgins about sex upon marriage.”

Many young women and teenage girls around the world were sent off to marriage, away from their families for the first time, and expected to immediately engage in wifely duties. The man might seem like a beastly, hulking monster upon first glance. These stories could serve to reassure the young brides that persevering with kindness would lead to a happier outcome. (As opposed to, for example, staging a bloody revolution or engaging in a Lysistrata-esque strike.)

There is an inherent brutal misogyny in the push for women to accept the husband, no matter how egregious his behavior, and just be nice enough to make him be nice back. Even if the monster changed to a nice man, it was never fair to force women to be in charge of this transformation. It was forced by circumstance. Like many societal ills we’ve all had to deal with, many writers have taken up the monster and reformed them to be a figure of understanding, and still a fearful creature, as opposed to a threat to be managed by benevolent maidenhood.

These fairytales have inspired countless adult and YA adaptations, and there are quite a few that choose to include the romance with the monsters that came from the original fairytales. Retellings do not serve the same didactic purpose that their fairytale and folklore predecessors did: writers choose to return to these stories to process what it means and how love looks in these relationships when you interrogate them more deeply. Instead of the monster turning back into a handsome prince, the monster can stay a monster, but a monster in love (and sexy). Monster romance and erotica reclaims the brutality of monsters and plumbs the monstrous fairytales for their sensual draw.

All this history leads to some confusion over the whole monster romance and monster erotica genre. Much of the Hollywood messaging we receive (besides Beauty and the Beast) is to defeat the grotesque monster. The idea that many readers are not only passively interested in getting down with monsters, but actively enthusiastic about it, has caused a few dust-ups in the public.

One of the tamer public media circuses over women loving monsters came during the height of Twilight’s popularity. Loving the vampires and werewolves was remarked on by even the actors in the movies. Edward and Jacob, however, are totally domesticated compared to more recent monster romance.

In 2013, the popularity of Virginia Wade’s novel Moan for Bigfoot (which you might know by its saucier name) caught the attention of various national publications because it was banned from Amazon for violating their content guidelines. Writers argued that censoring their titles and book descriptions would have a negative effect on their readers: if the person purchasing the book didn’t know there would be monster sex, it would be shocking. If someone looking for a monster sex book was searching for it specifically, they wouldn’t be able to find it.

It is a problem for people that monster erotica (and various other romance novels with dark themes) include body horror, gothic themes, and scenes with dubious consent. In a piece about the popularity of monster erotica, Lauren Davis acknowledged, “there’s a sort of safety in these fantasies. You’re not really going to be abducted by aliens or kidnapped by minotaurs or forced to be a dragon’s bride.” Falling so completely into a different world can be extremely appealing.

Finding the Beauty in Monsters

The continued reticence to embrace and empathize with monster love stories makes the mainstream success of The Shape of Water all the more impressive. Monster romance continues to be a popular genre, even in the form of hyper-specific parody in the books of Chuck Tingle. The consistent fandom around The Phantom of the Opera also could fall into this theme.

I find the titillating articles about how weird it seems that people like to read monster erotica a little tired at this point. Finding a throughline from older monster stories to current pterodactyl romance novels (and fish man movies) is not meant to condemn people who find joy and comfort in monster romance. On the flip side, I tend to agree with Guillermo Del Toro and have more sympathy for the monster: “It’s about celebrating imperfection, celebrating otherness, falling in love with the other, you know?”

As with any dark fiction, monster romance isn’t for everyone. The genre is very wide, from types of monsters to leaning into comedy or gothic horror. Like most genres, there’s something for everyone who wants to find it.

If you’re looking to get started on monster romance, there are sea monster love stories, gothic romance, and tons of books about monsters in general to satisfy your appetite.